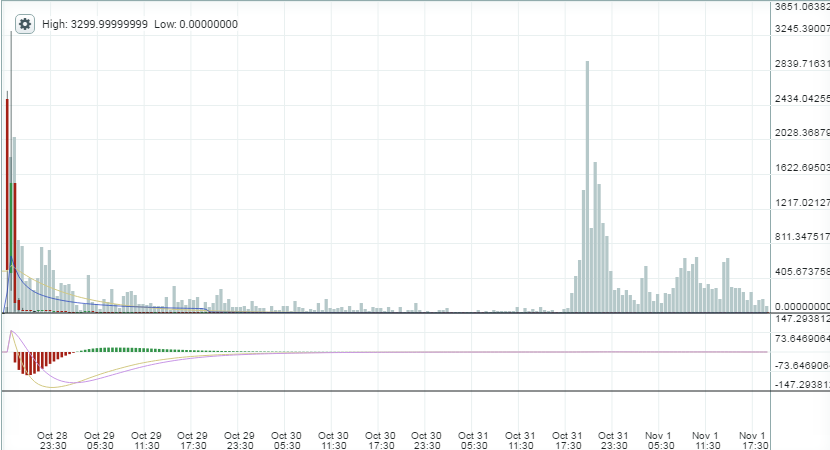 October 28, 2016 has set its place in the Cryptocurrency History books with what must be the record for the largest Pump and Dump. (See Figure 1)

While watching the live stream out of the Zcash headquarters for the Genesis block, ZEC futures prices on BitMEX pushed past 1 XBT, from a listing price of 0.025 XBT. As the first block was mined and subsequent blocks followed, the hype was real. Bitfinex started to publish bids for ZEC in an early attempt to gain liquidity; however, their capped prices at 0.55 XBT weren’t as attractive when Poloniex launched the ZEC/BTC market and bids started to pour in at around 10 XBT.

There was chatter about trying to post a high price in an attempt to honeypot BitMEX traders to bid up from the current 1 XBT price, which they initially did. Prices moved up to 2 XBT, and then back down to 1.2 XBT. Around this time ludicrous bids for 1 ZEC were being made on Poloniex: 100 XBT, 1,000 XBT, 2,000 XBT, 2,600 XBT etc.

And then the first few ZEC started to arrive at Poloniex.

Early miners saw an opportunity to capitalise on the hype, and started to offer their precious ZEC at levels up to a high of almost 3,300 XBT.

Prices then bounced between 3,000, 2,000 and 1,000 with no end in sight. Having said that, given the amount of supply at this time was less than the age of consent in Japan, the same ZECs were being passed around more than Sasha Grey in Black Power 3.

BitMEX shortly followed, with prices rising up to the self-imposed 10 XBT limit. The hangover set in, and prices crashed on both Poloniex and BitMEX. Poloniex crashed down to a low of 15 XBT, with BitMEX falling to 1 XBT.

In a short survey, some successful traders on BitMEX opined that they were bullish on Zcash from the very beginning. Those who got Auto-Deleveraged kept re-entering positions and played into the hype of it, taking profit close to the top. Some traders made stupendous sums in under 10 minutes. Although the more honest of them acknowledged this was “pure gambling”.

Prices have somewhat stabilised. Poloniex trades between 1.2 and 1.5 XBT, and the December BitMEX futures contract, ZECZ16, trades much cheaper at 0.5 to 0.6 XBT. The spot over futures premium has stabilised at around 250%, down from 500% earlier this week. Figure 2 displays these numbers over the past 3 days. 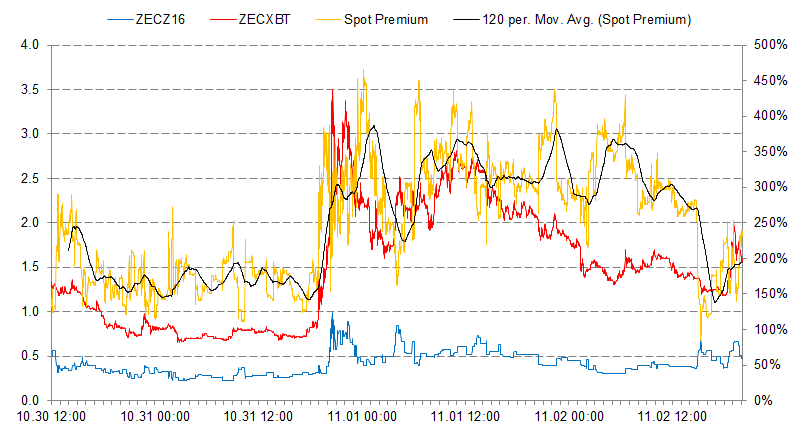 Is the hype over? Perhaps, but the fundamentals behind ZEC have not changed. This crypto is definitely a heavyweight when it comes to anonymity. It created panic in what was thought the market leader Monero, which is down 75% off its highs back in early September when Alphabay decided to adopt the currency for usage on its platform.

ZEC may not be worth 3,300 Bitcoin (or approx $2.5m per coin), but with Bitcoin fungibility concerns, anonymous transactions are the way forward for online gambling and darknet markets. It is estimated that over $1 trillion worth of bets and products are offered on these types of platforms globally.