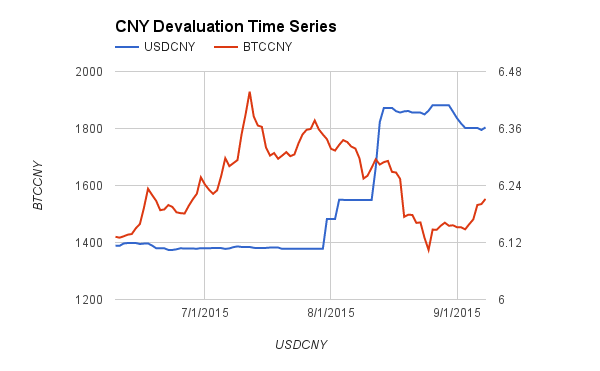 The PBOC shocked the world this summer with a 4% devaluation of the CNY. What was the effect on Bitcoin if any, due to their actions?

The above chart is a time series from early June until early September of USDCNY and BTCCNY (OKCoin.cn). The USDCNY rate was stable up until the beginning of August when the devaluation began. After the devaluation began, it appears that the two exchange rates were negatively correlated. Traditional economic thinking would suggest that a weaker currency would lead to a higher BTCCNY  rate.

I then calculated the correlation from Aug 30th to September 8th between the two rates. It came to -0.779. A correlation of 1.00 means the two rates move in the same direction and magnitude, and a correlation of -1.00 would means the two rates move in the opposite direction but same magnitude. The observed -0.779 correlation is a relatively strong negative correlation, meaning as CNY weakened and USDCNY moved higher, and the BTCCNY rate moved lower.
There were many external events such as the block size debate that occurred at the same time as the CNY was devalued. This may explain the divergence, but given China is the world’s largest Bitcoin trading market, I would expect the weakening of CNY to have a meaningful price positive impact on Bitcoin. It remains to be seen if as the effects of currency devaluation  will slowly change investors holding preferences for their domestic currency vs. other international risk assets. If you believe that the PBOC has just begun in its race to the bottom, buy BitMEX March 2016 (XBTH16) Bitcoin/USD futures contracts. As investors begin to sell CNY and buy wealth preserving risk assets, Bitcoin will benefit.