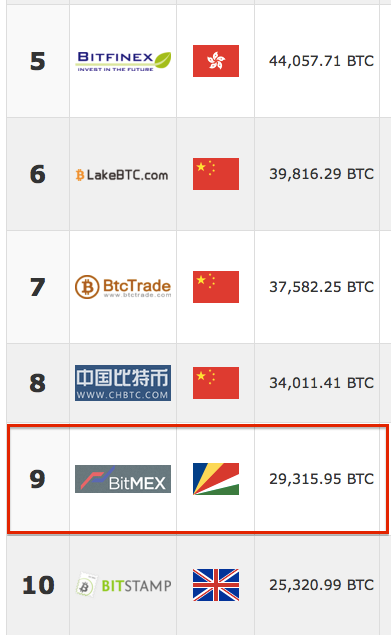 The launch of the 100x daily Bitcoin / USD futures contract, XBT24H, corresponded with a surge in intraday price volatility this weekend. The result was a massive surge in trading volumes on BitMEX. This weekend, we hit a high of 29,000 Bitcoin traded over a 24 hour period. We want to thank all of our traders for helping to make BitMEX one of the most liquid exchanges to trade Bitcoin / USD. If you have not tried out XBT24H, you can take it for a spin on the BitMEX Testnet before trading with real Bitcoin.

We are working diligently to improve the trading experience. We received many great suggestions for new features and UI design change requests. Look out for further announcements about upgrades to the platform.

The Case For CNY Devaluation 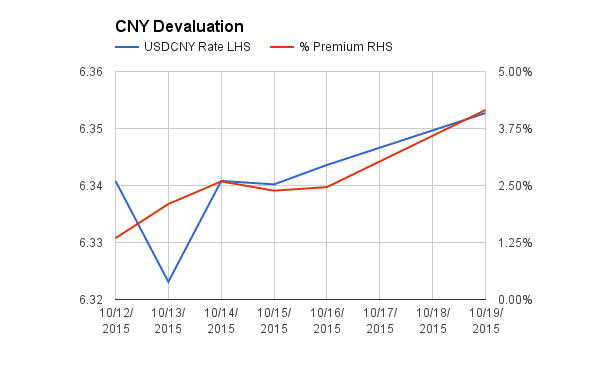 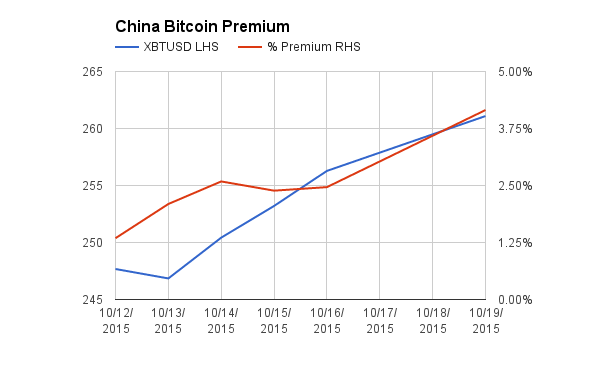 Whether or not the recent pump to 1835 CNY and subsequent dump to 1700 CNY is attributable to the MMM ponzi scheme, the premium of XBTCNY to XBTUSD continues to slowly rise. The PBOC resumed the CNY devaluation last Friday, and continued today. Each day at 9:15am Beijing time (GMT + 8), the PBOC releases the CNY Interbank Rate. The Interbank Rate is the rate at which banks can buy and sell CNY against the PBOC. The USDCNY and USDCNH (offshore CNY) follow the trend of the official interbank rate.

The PBOC has allowed the CNY to strengthen vs. the USD and more importantly their trade rivals Germany (EUR), Japan (JPY), and South Korea (KRW) for years. Now with global growth slowing, and the aggressive money printing from Japan and Europe, China’s hand has been forced. Xi Jinping’s biggest economic goal is to shift China away from an investment led economy to a services and consumption lead one. Many politically important groups will be impoverished by the shift in economic focus. A way to cushion the blow to the manufacturing sector is to weaken the CNY.

While the CNY was strengthening, the most popular carry trade was to borrow USD, FX into CNY, then buy bonds yielding significantly more than the cost of USD funds. Because the PBOC had a one way policy of CNY appreciation, carry traders did not forward hedge USDCNY. If they had hedged, the USDCNY forward premium would wipe out most of the profit. These carry traders profited off the PBOC who sold CNY and bought USD. The PBOC’s USD assets, mainly US treasuries, have much lower yields than comparable CNY debt. The easiest way to import USD into China was to fake invoices; this allowed individuals and corporate to FX more USD into CNY than allowed by the PBOC.

The one way CNY appreciation is now over. The carry traders are rushing for the exits, and the PBOC has put up the road blocks. Banks are now enforcing the yearly $50,000 FX limit; overseas UnionPay withdrawals are limited to 100,000 CNY per year; money changers, who previously would help move CNY in and out of China, have been shut. With capital trapped onshore, the PBOC can now devalue the CNY without suffering a loss in China’s capital account.

With the easy and cheap means of moving CNY out of China closed, Bitcoin presents a legal and viable option. The premium of XBTCNY and XBTUSD has begun rising ever since the PBOC devalued the CNY by 4% in August. If this hot money leaks into Bitcoin, the premium and price will shoot higher.

This process will happen either slowly or all at once. To take a longer term bullish view on the devaluation, consider buying the BitMEX March 2016 25x leveraged Bitcoin / USD futures contract, XBTH16. 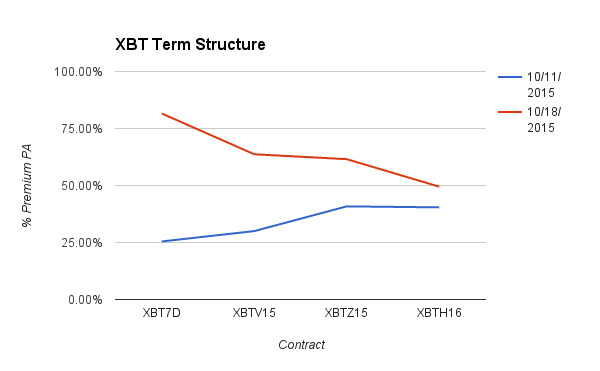 The term structure has now become inverted. XBTH16 looks quite cheap in comparison to its peers. XBTH16’s basis only increased 9%. Given the time value this contract still retains, it should increase the most if the price volatility continues. If the curve flattens, XBTH16 should trade at 60%, an increase of 10% annualised. If the curve steepens, XBTH16 could trade at 70%, an increase of 20% annualised.

The stair step rally continued into last Friday’s settlement. Then Saturday early morning China time, a pump began. XBTCNY reached a high of 1835. At the pump’s peak, the premium in China was 10%.