This past Tuesday, I participated on a FinTech disruption panel at the Bloomberg Most Influential Summit. [Video Link]

Also, I sat down for an interview with Coin Republic’s David Moskowitz. We talked about how and why Bitcoin businesses should hedge. [Video Link] 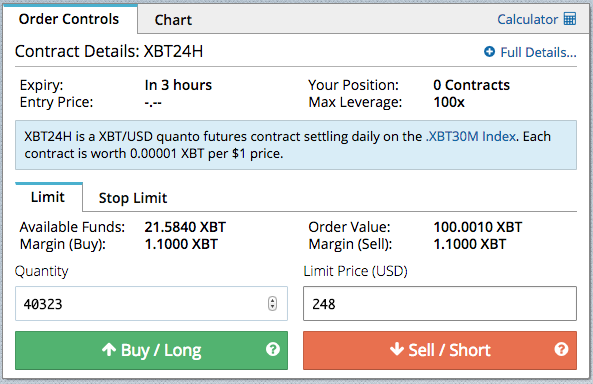 Due to the low price volatility, BitMEX has increased leverage on its daily (XBT24H) and weekly (XBT7D) Bitcoin / USD futures contracts. Traders can now use 100x leverage on XBT24H, and 50x leverage on XBT7D. Due to the tight trading ranges, traders employing scalping strategies should use these two contracts. Traders are not forced to use the maximum amount of leverage. If “Isolate Margin” is not enabled, the liquidation price will be calculated based on a trader’s total available equity with BitMEX.

The Wizards of Oz 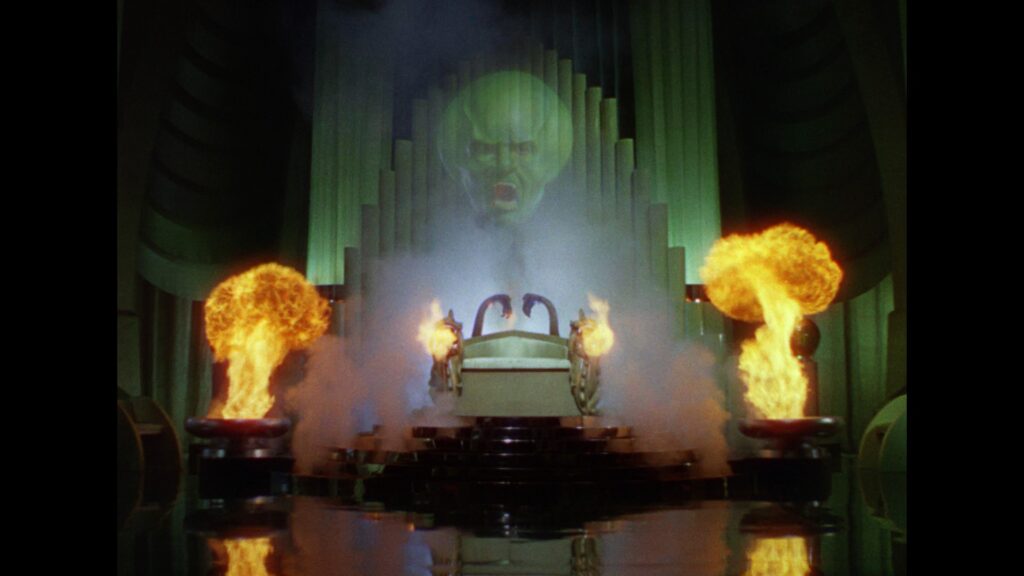 The last few weeks have witnessed the death of the cult of central banking. The investing narrative of the past 7 years was “central bankers can save the world economy”. With the ability to print unlimited money, there was no economic ill that couldn’t be cured. Investors who invested in risk assets were amply rewarded for their belief. The religion of central banking produced 0% interest rates and income inequality, and those who noticed the ills were regarded as Cassandras.

Nothing lasts forever, and market participants are now openly questioning the monetary policies followed by all central banks. Even central bankers themselves are quick to point out that they alone cannot produce an economic nirvana. Straight from the horse’s mouth, the G30 Group report highlights the dim view that central bankers have of themselves [link]:

Central bank policies since the outbreak of the crisis have made a crucial contribution to restoring the appearance of financial stability.

Nevertheless, for this appearance to become a reality, underlying problems rooted in very high debt levels must be resolved if global growth is to be more sustainably restored.

Investors construct narratives as shortcuts to process the incomplete information they have about the future. As the central bank omnipotence narrative wanes, investors might focus on cash flows again. The question used to be, which sectors will benefit the most from inflows of hot money. Whether or not a business can generate a net profit was of secondary concern. The question will now become, if free money is no longer effective in boosting asset prices, does this business produce a good or service that is actually desired by the market, and can they turn a profit.

The most important question is what assets can one buy to express a negative view on the effectiveness of central banking. Gold traditionally has been the go to asset, and the new kid on the block is Bitcoin. The 2015 narrative for Bitcoin was “Bitcoin bad, blockchain good”. Banks and other financial institutions eschewed the word Bitcoin, and transformed into digital payments and blockchain companies.

Bitcoin became the scarlet letter. The price and interest in the currency suffered as a result. The price fell 50%, and volatility remains at all time lows. As it becomes popular again to bash central bankers’ attempts to control every variable of the global economy, Gold and Bitcoin will benefit as an expression of dissatisfaction with the high priests and priestesses.

Now is the best time to increase exposure to assets that have fallen out of favour and price. Bitcoin will be fashionable again when the price exits its funk. Savvy traders who purchase Bitcoin derivatives now will see above average returns as premiums on the future value of Bitcoin rises as well as the price. Any product that has significant time value should be bought. For patient traders, BitMEX March 2016 futures are recommended. Between now and March we might get the first and last Federal Reserve rate hike, and/or a severe correction in the global financial markets. We are at the end of a 7 year bull market. Nothing moves in a straight line, or lasts forever.

How Liquid Is Your Portfolio? 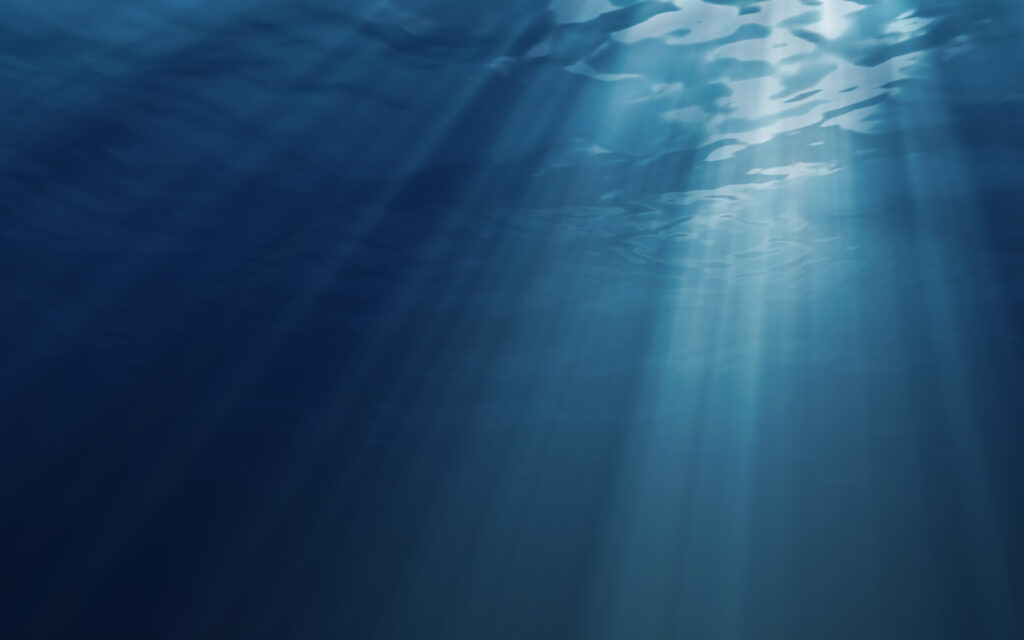 — Coleridge, The Rime of the Ancient Mariner

A common refrain about Bitcoin from many institutional investors is its illiquidity. Bitcoin trades close to $100 million per day; this is very illiquid compared to G10 currency pairs. But what many forget is that in our centrally planned economic world, citizens are one government directive away from being unable to trade the assets in their portfolio.

Turning to the biggest success and failure of 2015, the Chinese equity market, many investors are learning just how liquid this market is. The Chinese government began aggressively pushing anyone and everyone to trade the stock market. The aggressive policies helped the market more than double in one year. But as the market corrected almost 50%, the government barred many large traders and funds from selling securities. The CSRC has to date brought 41 cases of “market manipulation” (read: selling stocks) against various institutions.

At certain points this year, the CSI300 futures contract was more liquid than Globex S&P Mini futures contract. And then the liquidity plummeted as the government began creating examples of traders attempting to realise profits or cut losses. Many in the west chided Chinese about their immature response to their stock market collapse. And many large investors have completely pulled out of China and will not return for some time.

This is not just a Chinese phenomenon. Bans on short selling and long selling were used during the GFC just 7 years ago. These same countries that claim to be committed to capitalist principles, have all implemented policies with a similar spirit.

If a market’s national government can effectively shut the market at a moment’s notice when it serves political ends, how liquid is your portfolio? Contrast this to Bitcoin, where there are a multitude of exchange operators. When MtGox went down, that wasn’t the end of Bitcoin trading. When Bitstamp got hacked and was offline for one week, people still exchanged Bitcoin in an orderly fashion. While the absolute liquidity is orders of magnitude less than other assets, at least Bitcoin can still be traded when the leading exchanges are shut down. 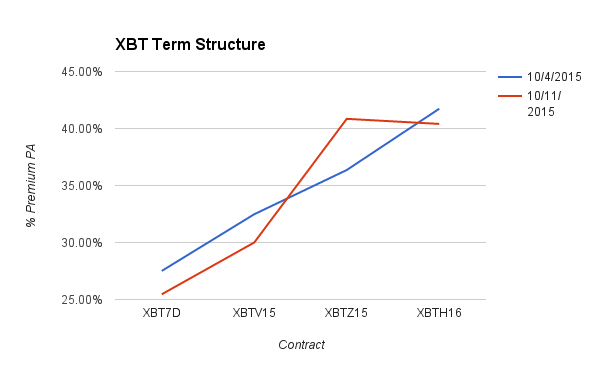 Volatility continued to fall last week. XBT7D, XBTV15, and XBTH16’s basis all declined WoW. The drop in volatility is happening against a backdrop of a slowly building rally. If Bitcoin can break through $260, the surge of trading will lift the volatility out of its slump. XBTH16 has the most amount of time value remaining, therefore it has the greatest sensitivity to a move in basis. It is the most attractive contract to buy if one believes in a normalisation of volatility and a possible continuation of the rally.

Buy XBTH16 vs. sell XBTV15 to profit from a rise in price volatility and interest rates.

The slow ascent to $260 continues. Bitcoin / USD is now flirting with $250. There is formidable resistance at this level, but the underlying fundamentals of this rally are encouraging.

Golden Week is now finished in China, and price action will increase. The next major known event is the Silk Road auction, which takes place in early November.