From now until September 1, 2015, trading fees across BitMEX are now zero!

BitMEX has raised leverage on our XBT Bitcoin / USD futures contracts to 25x.

The new Simplified UI is now live. Traders may now choose from the “Basic” or “Advanced” layout. 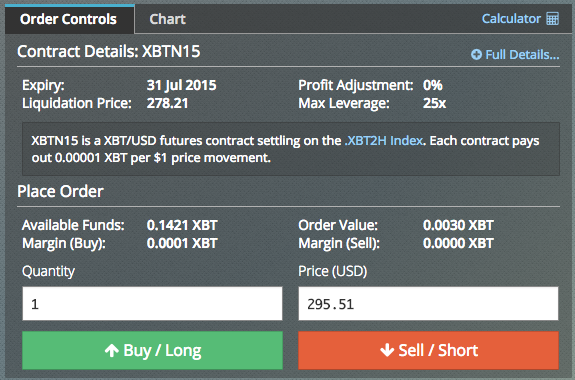 BitMEX aims to serve the entire crypto trading community. The return profile of our XBT quanto Bitcoin futures contracts is ideal for speculators. Starting today, we have raised the leverage to 25x for all XBT contracts. For example, if you wished to open a position worth 100 Bitcoin, you only need 4 Bitcoin of margin.

High-leverage instruments are high-risk. During fast moving markets, it is possible that some traders may go bankrupt. To ensure a zero sum system, BitMEX developed the Dynamic Profit Equalisation system. Traders can withdraw realised profit from the system subject to an adjustment.

Profits are held until settlement or rebalancing of a particular contract. The system loss is calculated, and trader’s profits are adjusted proportionally. Using BitMEX’s state-of-the-art trading engine, BitMEX is able to calculate the projected loss percentage in real-time, giving traders the chance to make trading decisions based on the anticipated systemic loss.

The implied profit adjustment, if any, is displayed on the order book at all times. We want users to enter into trades with full knowledge of the state of the system.

To discourage traders from attempting to manipulate the futures market with the intention of causing margin calls, the futures contracts for margin and unrealised pnl purposes will be marked at the Bitfinex spot price plus an exchange set offset. The mark price will generally be set to match the prevailing futures last traded price. It will change in real time with the movement of the spot price. If a trader attempts to aggressively push the last traded price away from the mark price, traders will not be liquidated. The mark price has no effect on realised pnl.

Last week, the global commodity complex got choke slammed. Gold and silver were monkey hammered through key support levels. The world is afraid of a strong dollar and a less investment-focused Chinese economy. The Australian dollar (the purest play in currency land on commodity strength) is in free fall.

The world economy is not well. Apart from super luxury homes and apartments, people can afford less and less with their stagnating or declining incomes. China is transitioning away from breakneck industrialisation. Chinese electricity consumption (this is about the only statistic you can somewhat trust coming from China) grew at the slowest pace in 30 years.

Bitcoin, the newest monetary commodity on the block, stood its ground. The only global growth area is financial repression. Governments are ratcheting up their efforts to sequester and steal their citizens’ wealth. More and more people are waking up to the fact that the socialist utopia promised by their elected or unelected kleptocrats is a chimera. Governments with their backs to the wall will always steal their citizens’ money with capital controls and inflation. Bet on this one area of global growth by going long Bitcoin.

I Told You So 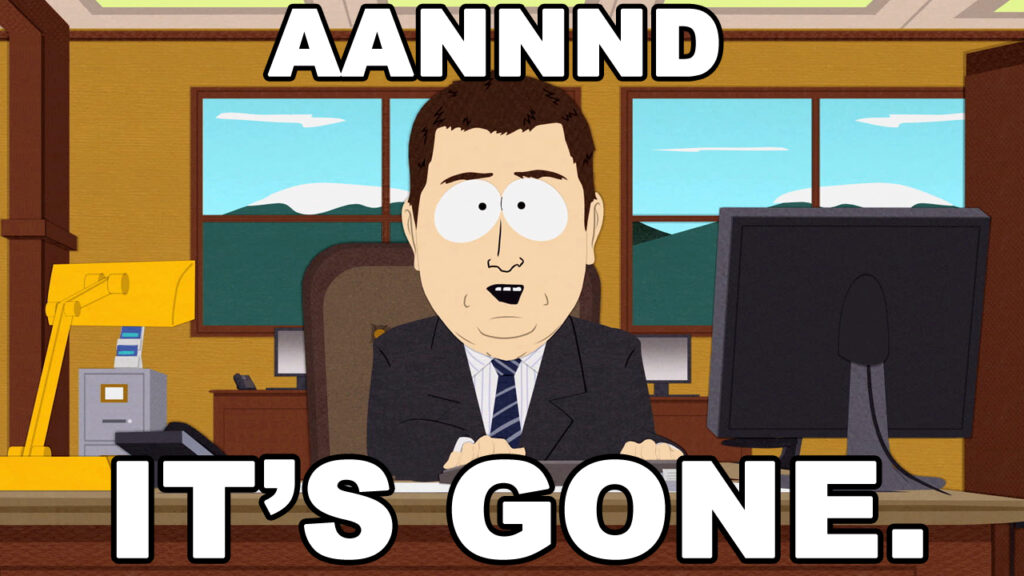 f you repeat something enough, people will get the message. Many economic pundits globally have been warning Greeks since the beginning of 2015 that a depositor bail-in was coming. The recent Greek capitulation to their European overlords has changed nothing for ordinary citizens. The capital controls remain in place. Businesses cannot import the goods they need. And with each passing day probability and magnitude of a depositor bail-in grows. Now Reuters predicts that capital controls will last for months.

The Europeans have refused to hand over fresh Euros to recapitalise Greek banks. They fear their domestic populations will balk at tax dollars going into the black hole that is the Greek banking system. The capital controls remain, and as a pre-condition for any bailout it is almost certain that ordinary depositors will not see a portion of their wealth ever again.

At this juncture, the Greeks have only themselves to blame. They elected Syriza on the promise of repudiating the austerity platform. That was the moment to pull money out of Greek banks and spirit it away abroad. The wealthy Greeks got out of Dodge and left the plebes to fend for themselves on 60 Euros per day.

In the past 2 years, the first world has been given two concrete examples of capital controls and depositor theft. If you haven’t gotten the message by now, I don’t know what will convince you that money in a bank isn’t yours. This doesn’t mean you should rush to store all your wealth under your mattress or start setting up offshore bank accounts. Recent events have shown that storing 100% of your wealth in your domestic banking system is risky. Diversification is key.

Bitcoin is one pillar of a proper diversification strategy. Capital controls and banking closures are usually the precursor of violence. If you had to relocate, possessing an asset that can be exchanged globally for other currencies or goods is prudent. In addition to your cache of gold and silver coins, consider a Bitcoin wallet filled with emergency funds. The beauty of Bitcoin will make itself apparent during a breakdown of polite society. 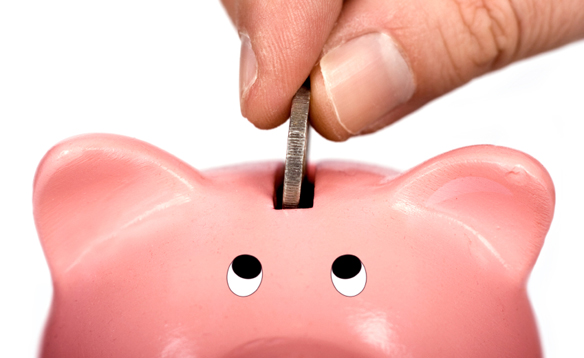 There are now a few platforms offering Bitcoin futures products. In any new market, there are sometimes large price discrepancies between similar products. Traders with sufficient knowledge can employ arbitrage strategies and profit from market inefficiencies. Futures vs. futures arbitrage is one strategy that can increase the return on your dormant Bitcoin.

This strategy is geared towards traders who have a core holding of Bitcoin that they don’t plan on selling. Assume that there are two futures contracts that have the same return profile and expire on the same date. Futures A and B trade at $100 and $110 respectively, and expire in one month. Each futures contract requires margin of 20% in Bitcoin. 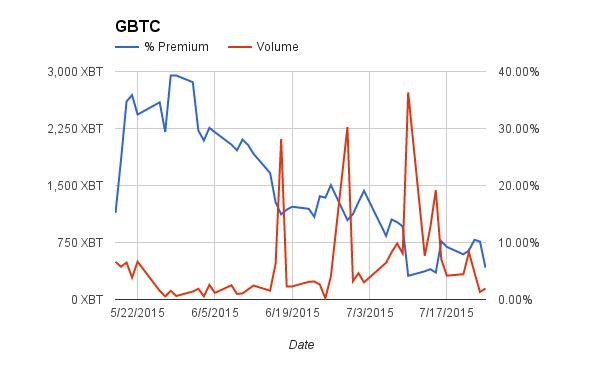 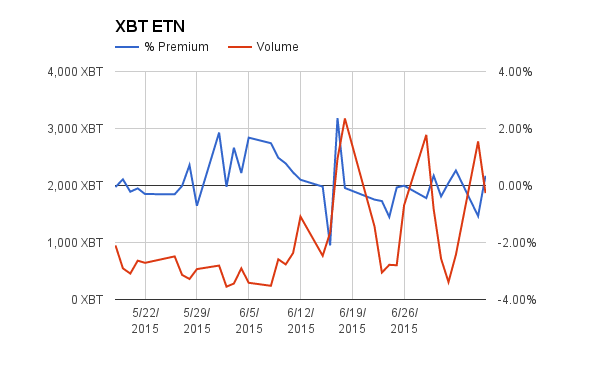 Chop, Chop, Chop. Bitcoin exited the $270’s with a bang straight on through to $295. Ever since, the price has been dancing to the tune of LTC, and chopping up trader’s portfolios in the process. $300 looms large, but the battle for that mountaintop is proving intense. It is a tough call to discern whether Bitcoin will collapse to $200, or rise above $300-$320.

The temporary removal of a formal Grexit has left Bitcoin searching for a narrative to carry it higher. In the absence of a new strong narrative, expect the price to languish. The longer it spends within striking distance of $300, the more vulnerable it is to a well executed bear raid.

One last attempt to breach $300 in this rally is likely. Failure to scale this peak will give the bears a perfect opportunity to inflict a severe mental and economic blow to the bulls. The past attempt and failures at $300 were followed by a swift downdraft. Expect the operators to go for blood and attempt to puncture $200 once more. In the absence of a global macro wobble, unlevered buyers should wait for cheap pickings in the low $200’s.