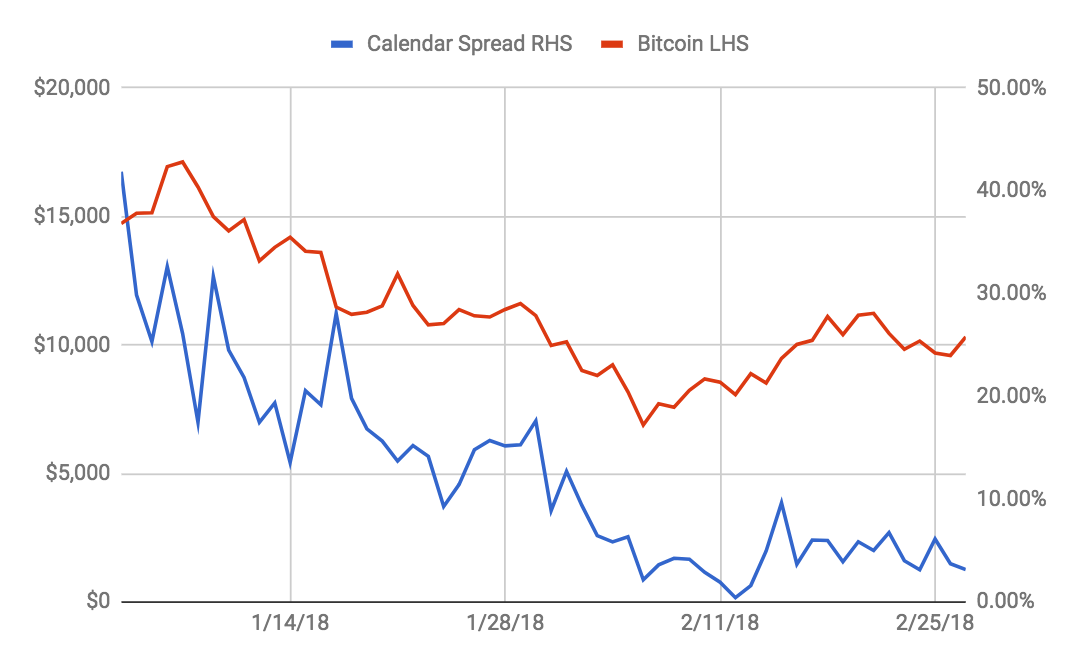 The above chart shows the Bitcoin price and the annualised premium of the March (XBTH18) and June (XBTM18) Bitcoin/USD contract spread.

The calendar spread is calculated by the following function:

0.2493 represents the annualized time value between the March and June expiry dates.

The calendar spread is a useful gauge of how bullish or bearish traders are in a forward starting-time period. In early February, Bitcoin lost close to 70% of its value measured against its December 2017 all-time high. The spread reached a low of 0.42% annualised during the same period.

Catching knives is deadly for most mortal traders. Some are able to bottom-tick the market, but they are few and far between. After rebounding close to 100% from the recent low of $6,000, the market has entered choppy waters.

Trading the chop is a skill in and of itself. The chop will take a healthy stack and make it look sickly before the next breakout happens. Therefore, using derivative spread trades with a view on the direction of the spot market is a better risk-adjusted way to express a view.

For those who believe we are in the midst of a full retrace back to $20,000, going long on the XBTM18/XBTH18 calendar spread is prudent. To go long, you must go long XBTM18 and simultaneously go short on XBTH18.

If the market indeed continues to push higher, XBTM18’s price will increase faster than that of XBTH18’s. That is because XBTM18 possesses more time value, so the interest-rate component will make up a significant percentage of its value relative to XBTH18.

This trade comes relatively cheap. Currently, the spread is trading at positive 3.15% annualised. Because the spread is positive, the trade has negative theta or time value. XBTH18 expires at the end of March. By the end of March, if XBTM18 doesn’t outperform, you will lose an outright 0.78%, making your daily theta 0.026%.

The reason why you put this trade on rather than going naked long is that the market-to-market losses on this trade are capped at 0.78% unlevered. Imagine you bought Bitcoin at $10,000, then it crashed to $6,000. As a weak hand, you panic-sold the bottom. But the price quickly recovered back to $10,000, and even though your trade broke even over less than one month, you lost 40% because you could not mentally handle the mark to market.

With a calendar spread, you know from the outset your unlevered maximum loss. If you are uncomfortable with that loss a priori, you can refrain from putting on the trade.

For those who want to juice up the returns, add more leverage to both legs. However, be cognisant that BitMEX does not use portfolio margin — that is, gains in one contract will not offset your liquidation price on the other. You must monitor the liquidation price of the contract with an unrealised loss and continue to top up your account to avoid liquidation.