Abstract: Following our earlier research pieces on Tether, financial information from Q1 2018 has been released by the financial regulators in Puerto Rico, providing more evidence of the impact of Tether. In addition to this, a source close to Tether has confirmed to us that the speculation in our initial report is correct.

After our earlier speculation that Noble Bank in Puetro Rico was Tether’s primary reserve bank, a few months later in May 2018 Bloomberg released an article further substantiating our claims. As Bloomberg put it:

According to three people with knowledge of the matter, Noble Bank International, based in San Juan, Puerto Rico, took over banking duties for Bitfinex last year.

In addition to the above, BitMEX Research has also now spoken to people close to Tether, who have also confirmed the reliability of most of the claims in our February 2018 report. Our initial discovery was based on the disclosure of data from the financial regulator in Puerto Rico, who have recently provided the latest update, for the quarter ended March 2018. In our view, the data continues to support our initial speculation.

We have updated the chart below from the version in our earlier piece, which compares the Tether balance with the deposits in the banking category in Puerto Rico which contains Noble Bank.

Cash as a percentage of total assets (an indication of full-reserve banking) also increased in the quarter, from 85.8% to 91.0%. This also indicates crypto-coin or Tether-related activity, as we explained in the previous piece. 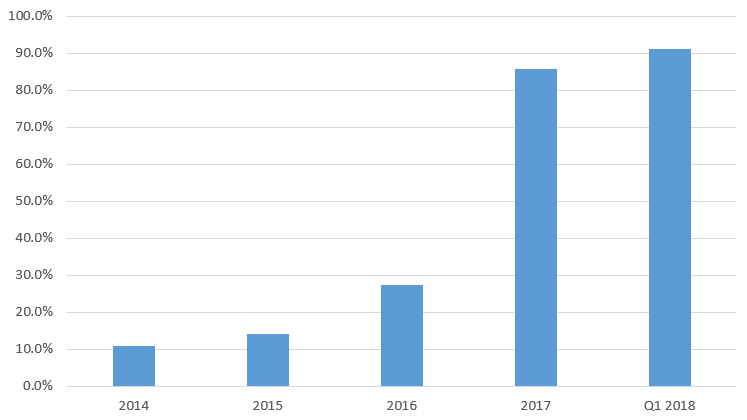 In the quarter the regulator appears to have changed the name of the Tether balance, to “Deposits, money market investments and other interest-bearing balances” from “Cash in banks“. We do not view this as suspicious.