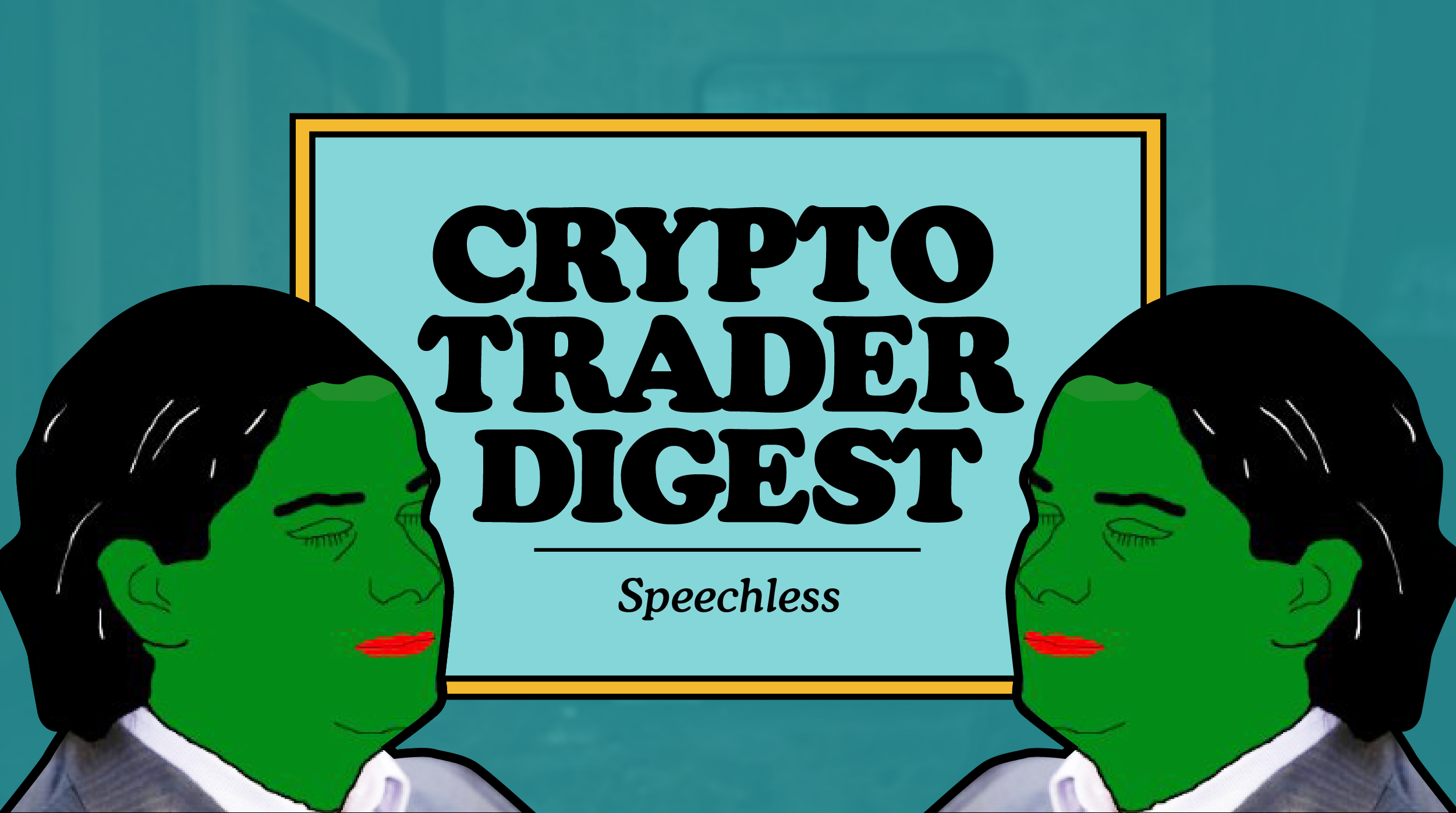 (Any views expressed in the below are the personal views of the author and should not form the basis for making investment decisions, nor be construed as a recommendation or advice to engage in investment transactions.)

I have no words…

I actually have a few thousand for y’all.

I asked a question on Twitter a few days ago wondering who would be the Lehman Brothers of this crypto credit cycle.

Many said it would be FTX, and I honestly laughed it off. I never believed they would go down — and yet, here we are. The catalyst for their downfall is the same as it always is — a good business overextending themselves by gorging on cheap credit collateralised by high and rising valuations of assets on their balance sheet. And as money became more expensive and the cycle turned, their nakedness was exposed for all to see.

This essay is a simple story. I shall narrate a play-by-play, built around tweets and public statements. I intend to respectfully read between the lines and offer my opinion on how this all came to be and what the future holds. To that end, I believe the final down candle in this crypto bear market is near, and that we shall emerge from the bear market with less deadweight and more opportunity for those who survived.

Before we begin, I sincerely believe that Sam Bankman-Fried (SBF) is a once in a generation trading talent. Even though he just blew up, the empire he put together took a certain amount of panache that is hard to come by. And I must give even more kudos to Baron CZ — when the news broke that Binance might acquire FTX, I sent CZ the following message:

“I fucking love you man. Boss move, much respect.”

It was all a dream, I used to read Coindesk magazine…

It all started with a Coindesk article that featured a breakdown of a leaked Alameda balance sheet.

The financials make concrete what industry-watchers already suspect: Alameda is big. As of June 30, the company’s assets amounted to $14.6 billion. Its single biggest asset: $3.66 billion of “unlocked FTT.” The third-largest entry on the assets side of the accounting ledger? A $2.16 billion pile of “FTT collateral.”

“It’s fascinating to see that the majority of the net equity in the Alameda business is actually FTX’s own centrally controlled and printed-out-of-thin-air token,” said Cory Klippsten, CEO of investment platform Swan Bitcoin, who is known for his critical views of altcoins, which refer to cryptocurrencies other than bitcoin (BTC).

Other significant assets on the balance sheet include $3.37 billion of “crypto held” and large amounts of the Solana blockchain’s native token: $292 million of “unlocked SOL,” $863 million of “locked SOL” and $41 million of “SOL collateral.” Bankman-Fried was an early investor in Solana. Other tokens mentioned by name are SRM (the token from the Serum decentralized exchange Bankman-Fried co-founded), MAPS, OXY and FIDA. There is also $134 million of cash and equivalents and a $2 billion “investment in equity securities.”

The majority of the “assets” on their balance sheet are illiquid FTT tokens and a bunch of shitcoins. Let’s break down why FTT is so important to the FTX / Alameda empire.

Per FTT’s stated tokenomics, FTX has pledged to use one third of all exchange fees to buy back FTT. SBF owns the majority of Alameda’s equity, while he continuously dilutes his FTX ownership to ship in capital from VC muppets. These VC muppets probably didn’t realise — or maybe they did, which is even worse for their investors — that a good chunk of FTX’s revenue was syphoned from FTX to Alameda through Alameda’s large FTT stake. Presumably, Alameda received a large allocation of FTT for providing essential market making services to FTX, and its participation in the FTT initial coin offering.

Ok, so that’s not ideal for FTX investors, but it isn’t what struck the deathblow to FTX’s solvency. The real issue — which folks started to raise questions about in the wake of the Coindesk article — was whether FTX loaned Alameda money (most likely USD or fiat stablecoins) and used Alameda’s FTT stake as collateral. If FTX did loan the funds, that isn’t an inherently fatal issue either — FTX was free to loan out its retained earnings to whomever it pleased. But the most pressing related concern was whether FTX rehypothecated customer deposits to Alameda and took FTT as collateral. And, as a subset of that, whether the fall in the value of FTT or some of the shitcoins on Alameda’s balance sheet would thus render Alameda insolvent. And finally, if Alameda became insolvent, would FTX lend money from client funds to prop it up? Again, these were the questions that people began asking after this article came out.

Lucas Nuzzi has an interesting theory on the connection between FTX, Alameda, and FTT. In short, he argues that Alameda blew up alongside Three Arrows Capital and others, but FTX lent Alameda money to survive in exchange for FTT tokens due to Alameda via its participation in the FTT ICO. Presumably, CZ read the same article as everyone else and decided to dump Binance’s sizeable FTT stake in the market. There was also apparently some beef between the two crypto Barons. Once CZ started airing his concerns, though, alarm bells started ringing in the heads of FTX depositors.

In crypto, when you have even an inkling that an exchange might be insolvent, you pull your funds immediately and ask questions later. Logic suggests that even if Alameda went bust, FTX should suffer no issues processing all withdrawals. They are two separate companies, and according to SBF’s claims, FTX’s customer deposits weren’t reinvested — not even in super duper safe US Treasuries. 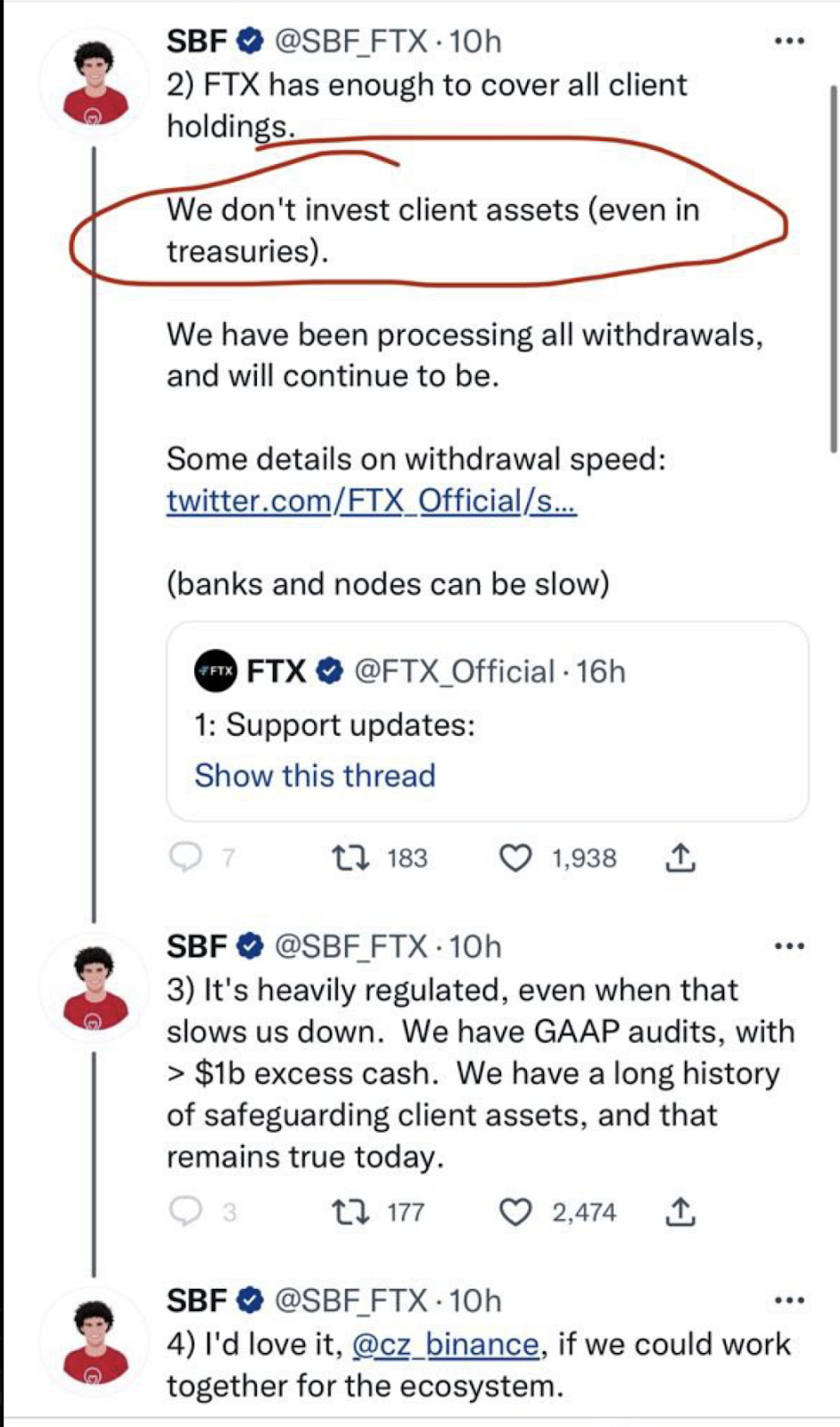 At this point, there was no reason to believe SBF was lying. But even still, you ain’t gonna wait around to find out with your money on the line. And therefore, capital started sprinting for the exits.

As always, he who sells first, sells best. Those who immediately withdrew their funds got them back quite quickly. But as Monday bled into Tuesday, FTX’s withdrawal processing crawled to a halt — and all the while, FTT continued to plunge in price. The market was clearly trying to sniff out whether there was an FTT margin call trigger to punish Alameda for overextending themselves. I woke up on Tuesday to many messages from friends spreading rumours speculating that FTX may have been playin’ funny wit da customer monay. I prayed to Lord Satoshi that FTX had not not dipped their hands in the customer cookie jar.

And then, this bombshell hit the electromagnetic sphere: This insane announcement provided probable answers for many questions.

We don’t have a definitive answer to this question. But, Binance signed a non-binding letter of intent to purchase the entirety of FTX and pledged to attempt to make whole all customer deposits. That suggests that FTX experienced a run on its deposits and was unable to fill all the withdrawal requests of its customers. Otherwise, why would FTX need a bailout from Binance? FTX could have blown all their VC-muppet dry powder propping up Alameda, but that still wouldn’t have impaired their ability to meet withdrawals — unless they were dipping into the honeypot. 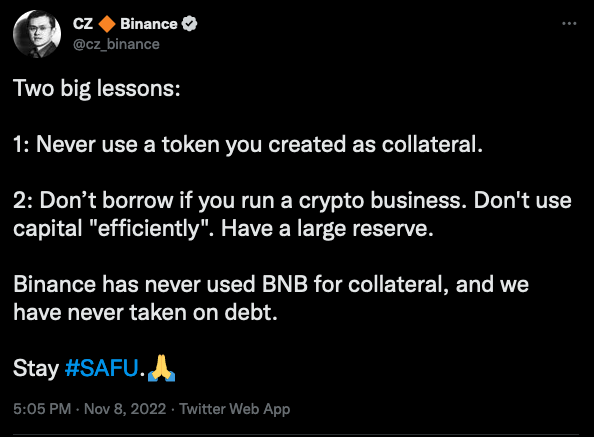 “Two big lessons.” Hmm … I wonder what situation he could be referring to? Baron CZ clearly seems to be insinuating that FTX may have done some improper things with customer funds, and thus, when the bank run happened, they were caught with their hands in the cookie jar. 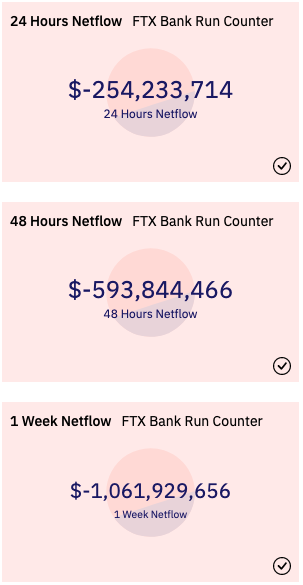 Over the last week, $1 billion of deposits fled FTX. That is what precipitated this awful turn of events. These are only the withdrawals that were processed. We do not know how many poor souls are still waiting for their money back.

Is Alameda insolvent or bankrupt?

We don’t have a definitive answer to this question. However, if FTX required a bailout from Binance, and it was needed because of financial help that FTX supposedly provided Alameda, then we can assume Alameda is probably donezo as well.

I’ll leave you with these words from Caroline Ellison, CEO of Alameda. I am sure she is dedicating 100% of her brain to salvaging whatever she can of Alameda.

Will the deal actually close?

A non-binding LOI is nice, but a firm commitment by Binance to purchase FTX and ringfence all its liabilities would be nicer. I imagine that the Binance’s corporate finance folks are busy digging through the financials of FTX and Alameda. If the hole is too big, then I expect Binance will walk away from the deal. And if Binance can’t or won’t do the deal, no one will be able to swallow the losses billowing from FTX.

What happens if FTX can’t find a new home?

Similar to Mt Gox, we will probably enter yet another high profile bankruptcy situation where depositors queue up to recover what they can. This could be a long or short process, but given how complex I imagine the holdings of FTX to be, recovery of any portion of deposits will likely take a very long time.

That’s obviously a travesty in and of itself. But when looking at the broader market impact, the even bigger question is:

Which companies that run crypto loan books had exposure to FTX and or Alameda?

SBF was the most pristine credit in all of crypto. He was the IT crypto pioneer. His beautiful cherub visage adorned the most prestigious mainstream financial magazines. His skin glistened like someone who only ate carrots and cucumbers. He could do no wrong — investing alongside anything SBF touched was a sure path to riches. Look at that Solana boom!