Bitcoin traders are in a funk currently. The price is still below $300, and more importantly it doesn’t move much intraday. Volatility is an ugly word to many businesses considering using Bitcoin as a payments method. Their business models can’t withstand whipsaws in the price. BitMEX derivatives can solve this issue, but that’s another post. The flip side is that without volatility, speculators will choose other asset classes to trade. Gauging from conversations in the TradingView and Whaleclub chat rooms, traders are switching to traditional Forex punting to get their volatility fix. Liquidity globally as a result has suffered. 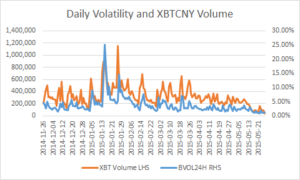 The above graph shows the .BVOL24H Index, which tracks daily Bitcoin volatility on Bitfinex, and the combined XBT volume on China’s three largest exchanges BTCChina, Huobi, and OKCoin. The more volatile the price during the day, the more volume traded. Volatility is absolutely necessary to build a deep and liquid market. Since February of this year, daily volatility and volumes have cratered. The second biggest bugaboo about Bitcoin is the lack of sufficient liquidity. A volatile asset that is liquid is far better than a placid one that is illiquid. Any business or trader attempting to place large trades currently will significantly move the market against them. In its infancy, Bitcoin needs volatility to keep speculators interested and providing much needed liquidity to the market.

It is not questioned that Chinese traders and their appetite for Bitcoin is a significant driving factor in volumes and price. Unfortunately for Bitcoin, the last six months have witnessed an equity retail trading nirvana in China. The Shanghai Composite has almost doubled in last 6 months. Millions of new brokerage accounts are opened weekly, with hungry punters eager to use and abuse margin trading in the Chinese equity casino. Bitcoin has lost out to the gangbuster stock rally that is happening in China. 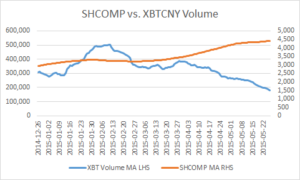 The above chart shows the 30-day moving average for total Bitcoin / CNY trading volume across the three leading Chinese exchanges and the Shanghai Composite (SHCOMP). Starting in March as SHCOMP began liftoff, the divergence in the equity market performance and Bitcoin trading volumes began. The People’s Bank of China (PBOC) has embarked on an aggressive money printing campaign with repeated cuts to the benchmark lending rate, the reserve ratio requirement, and allowing local governments to roll over their debts with the central bank. The addition of previously illegal margin trading has given speculators the juice they needed to pump the market. Stories of IPO’s up over 500% since launch are not uncommon and have transfixed traders. As the Bitcoin price and volatility fell, Chinese traders have switched to trading equities. The S&P 500 has rallied over 200% since its lows in March 2009 on the back of aggressive money printing by the Federal Reserve Bank. The PBOC with a very positive benchmark lending rate, has a long way to cut before 0%. The SHCOMP could be in the beginning stages of a multi-year melt-up similar to the S&P 500. The PBOC is blatantly goading the Chinese investment public into the equity market, and this is having disastrous effects on Bitcoin trading volumes.