The Greek tragedy is approaching a final catharsis. The Greeks remain adamant that the austerity measures demanded by the Troika are killing their country and will not be continued. The Troika refuses to stump up more cash to the “lazy” Greeks unless their demands are met. June 5 is D-day where it appears that Greece will formally default on their IMF loan. The Troika’s strategy is to starve Greek banks of capital and accelerate a depositor bank run. Once the inevitable capital controls are put in place, the populace will revolt against Syriza and place a more pliant government in charge, or so they hope.

Cyprus was the trial run, Greece is the main event. Bitcoiners are salivating at what they believe will be the spark of 2015’s bull run. The theory goes, the Cyprus bail-in triggered the April 2013 rally, therefore a Greek bail-in should ignite the June 2015 one. However upon a closer look at price action from January 2013 to April 2013, the Cyprus bail-in does not prove to be all that influential. 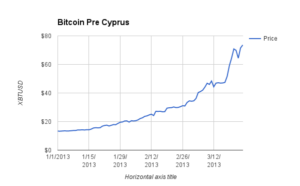 The chart above is the Mt. Gox daily price from 1 January 2013 to 25 March 2013. March 25th was the date that Cyprus stole from bank depositors. The rally in Bitcoin was already in effect well before the Cyprus event. The price was up over 450% in that time period. 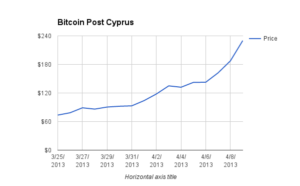 April 9th was the apex of the rally with Mt. Gox closing at $230. The return from March 25th to April 9th was “only” 212%. It appears that the Cyprus event while significant from a global macro standpoint, was not the catalyst of the rally. The price crashed two weeks later. The Cyprus event acted as a confirmatory bias in favour of a Bitcoin investment; the major deciding factor for investors was more likely that the price was up 450% in only 4 months.

What will happen in the event of a Grexit, or the more likely scenario of Greece staying in the EU but implementing capital controls and a parallel currency? Grexit would surely roil the capital markets and cause severe panic amongst investors. When in doubt sell everything and buy US Treasuries. That everything might include Bitcoin. Are serfs of other European countries likely to buy Bitcoin to escape the coming financial repression or withdraw domestically held Euros and send them to a German or Swiss bank account? That is the question Bitcoin bulls need to ask themselves. If Spanish, Portuguese, and Italian citizens would rather hold Euros in German and Swiss banks than Bitcoin, Grexit will either cause the Bitcoin price to tank or a continuation of the low volume, low volatility status quo.