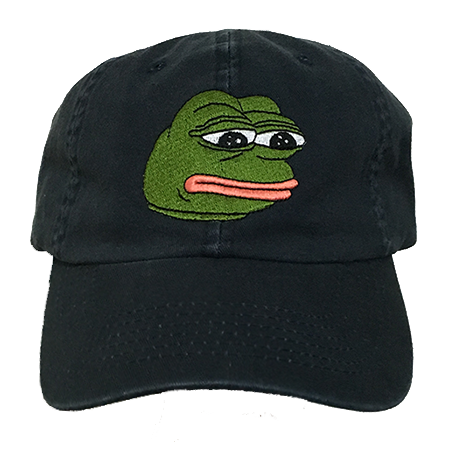 It all started in Feb 2017 on a beach in southern Thailand. Thailand’s king passed a few months prior, so the party atmosphere was subdued. Accompanied by a good friend of mine and one of the best shitcoin traders in the game, we headed down the beach in search of a party.

One of his big shitcoin positions at the time was Pepe Cash. This was the precursor to Crypto Kitties. For those not in the know, PepeCash is “rare pepe” memes hashed onto a blockchain. The next killer app to be sure. Pepe Cash was on a mini run, and my boy constantly monitored the market.

We didn’t find a poppin’ party, but we did find special shakes. The bartender didn’t think we were sideways enough so he went in the back to get the real stuff. Over the next few hours we walked for miles, met interesting tourists and locals, and waxed philosophical about shitcoins.

On our ride back to our hotel, I noticed something strange. Our Tuk Tuk driver was wearing a trucker hat with a Pepe the Frog logo on it. Not trusting my eyes, I nudged my friend to confirm what I saw. He concurred that our driver was sporting a Pepe hat. My friend immediately whipped out his phone to check the market. Perhaps they saw what we did. Pepe Cash was pumping and he bought some more.

We both looked at each other and knew it was a sign that something special would happen in 2017. What actually happened was far beyond what we could have ever imagined.

The real profit in 2017 was made by Ether holders, shitcoin projects, and promoters. The seed capital for many of the venerated crypto hedge funds emanated from outsized returns on holdings of Ether and token projects.

Jealous traditional VCs transformed portions of their funds into poorly designed hedge funds so that they too could punt shitcoins. Everyone piled info the same deals, all thinking they “got it”. That worked well all of 2017.

Today, Ether slides towards $200. At best, many token projects are down 50% from 2017. At worst, they are slightly above than zero.

This begs the questions:

Big Door In, Small Door Out

One of the first things you learn as an Asia Pacific trader: how you exit a position is more important than how you enter.

You could only go one way per trading day on a particular stock. If you bought, you could only continue buying intraday, you could not sell. There was a 5% limit up and down each day; any stock in the news would hit either of those limits immediately in the morning auction. That meant you had to fax your orders into the broker and make sure you got in the queue as early as possible. Unfortunately, sometimes your broker front ran you because they knew you had size to trade in a particular stock.

My boss encouraged me to take a view on the market. Given the structure of the market, if I took a position, I was stuck with it for a while. And when I wished to exit, I would have to sell into strength or buy weakness to get out of a long or short position respectively.

When I became an ETF market maker, I routinely traded other “Mickey Mouse” markets like India, Indonesia, and China just to name a few. These markets were and still are marked by snap decisions (often overnight) by regulators which adversely affect traders who aren’t politically connected. I became obsessed with how to get out of any position: a trait which serves me well in the crypto markets.

My first boss taught me that everything was my fault as the trader. Obviously there are many things outside of your control, but if you approach your profession with that mentality you attempt to quantify and mitigate all of the risks within your control.

The point of my sermon is that most VC investors do not approach their investments with this mentality. Due to the illiquidity of their investments, they can mark to fantasy, show amazing returns on paper, and get paid. The only secondary market validation of their investments is the next round of fundraising, which can easily always go up if you get your boys to go in along with you. You pump my bags, I’ll pump yours.

VC investors loved ICOs in the bull market because they could point to an objective and liquid secondary market valuation. They used these eye-popping returns to raise bigger shitcoin funds in 2017, and early 2018. However, objectivity and transparency is undesirable when your shitcoin portfolio is down by a minimum of 50%. Depending on the vintage of the fund, it might be up, however, most money was raised and invested in 2H2017 to 2H2018. That means the suckers who invested recently are most likely down.

The VC investor who has never suffered the vagaries of the market is as green as the noob who thinks he or she can go from 1 to 100 Bitcoin in a few trading days. They don’t have the mental strength to cut positions to limit further losses, or backup the truck and buy opportune dips even though they are down. More importantly, LPs can now see an objective last price for a particular token, and can’t be hoodwinked. They will attempt to be a Monday morning quarterback, and that only adds to the VC investors’ anxiety. At a certain point, they go “fuck it”, and dump everything they can.

It is this moment, that Ether goes from a 3-digit to a 2-digit shitcoin.

Before the SAFT and other private token placement monstrosities, the majority of money was raised from retail token punters. Now that projects are scared of federal pound-me-in-the-ass prison, they mostly only accept accredited investors.

Accredited investors always had a way into new technology projects due to their wealth and access. This pool of investors is also highly concentrated. The number of funds that can spray $1 to $5 million into every vapourware project that agrees with their sector thesis is limited. However, these gatekeepers control a vast ocean of institutional money. Softbank’s Vision Fund is $100 billion.

So instead of a more dispersed pool of investors, the number of token holders of projects raising serious money decreased dramatically starting in mid-2017. The liquidation preferences went from dispersed along a price curve, to very concentrated.

VCs all compete with each other for the same pools of capital. These pools of capital all employ professionals from the same schools, and who passed the same financial certification tests. Therefore they will buy together and sell together. The biggest risk in the money management game is career risk. Better to lose money with everyone else, than lose money alone. The latter will cost you your job. And there ain’t no other profession that pays as well as financial services relative to the skills needed to be a practitioner. I remember one of my besties trying to argue he had skills because he could calculate the NAV of an ETF using the sumproduct() function on his excel sheet. #Delusional.

The herd of token VC punters will all decide to sell at the same time. If you don’t sell, and the market continues falling, you lose your job. So everyone sells simultaneously but who can eat all that shit? Retail cannot because the deals would never have gotten so large without institutional money. So we gap lower, first on tokens, then on the mothership Ether.

I don’t know what that tipping point will be, but in hindsight, it will be obvious when the capitulation occurs. There are those who believe that a sustainable token economy can exist. But they won’t be buying at these levels. Sub-$100 takes us back to Spring 2017 levels. At those depressed prices, the carrion is ripe for ingestion.