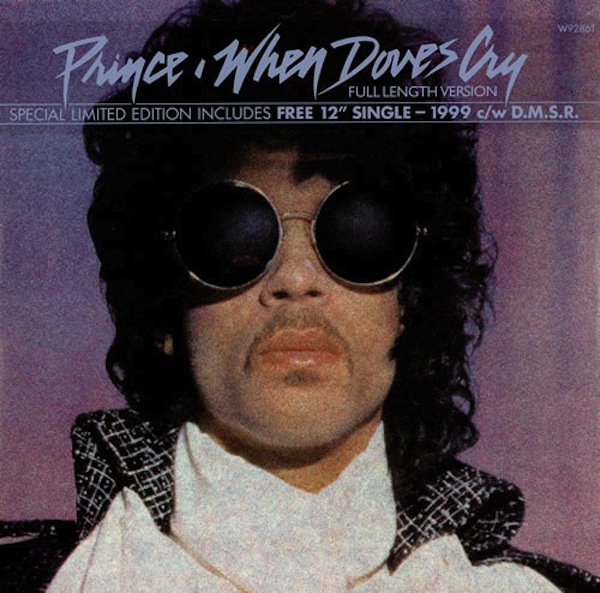 Janet Yellen dropped a bombshell on the market, and it was not received well. Yellen cited concerns over the global financial markets / economies as the main reason why the Fed decided not to raise rates. Even scarier, is she did not rule out negative interest rates or additional QE. If China and EM commodity exporters continue collapsing QE4EVA is coming.

The SPX (S&P 500) initially rallied on the news, but then puked into the close Thursday. The selling continued on Friday. A dovish Fed many thought would signal risk-on and a continuation of the equity market levitation, Wrong.com. The Fed admitted the world economy is not well, and if they raised rates by even 25bps, EM countries and China would come unglued. Then the financial blowback would hit the land of the free. Investors have a good reason to be frightened. If the markets reacted this poorly to the expectation of more free money and even negative interest rates, what hope is there. The whole reason why markets roared back from the depths of the hellish 2009 spring was free money being doled out first by the Fed, and then by every other central bank globally.

Bitcoin’s reaction to the news was muted. Volatility dropped as it re-emerged in other asset classes. While Bitcoin and gold share many differences, the big similarity is that both are put options on the credibility of central banks and fiat money. Gold rose in the last two trading days. If the markets open Monday and the bloodbath continues, Bitcoin may catch a bid and begin a slow methodical rally.

If the US decides to travel into never never land with negative interest rates (NIRP), the war on cash will begin in earnest. In effect the USD market will be split into physical notes and digital bank credit. Good money, physical notes, will be hoarded and bad money, digital bank credit, will be in abundance (Gresham’s law). For policy makers this creates issues as it is impossible to fully track and police the flow of cash. Europe is next, the ECB’s QE program is failing as there are not enough bonds to buy without severely impairing the markets. More NIRP is on the horizon for the EUR. The SNB (Swiss Franc) and Riksbank (Swedish Krona) are reading the tea leaves too. They will move aggressively into negative territory in response, as they aren’t happy at the appreciation of their currencies vs. the EUR.

It is not outlandish to imagine global governments banning cash, and forcing the plebes to tender cash for digital bank credit. Bitcoin is one solution, gold is another but carrying around your wealth in gold can get heavy (hopefully I have these problems soon). Bitcoin is digital money with no domestic restrictions. Those who realise this early will have a chance to protect a portion of their wealth from NIRP by buying Bitcoin at reasonable prices. These things happen slowly then all of a sudden. Greece is the poster child. Capital controls were almost assured once Syriza was elected. But still many Greeks did not withdraw their EUR. Then one Monday the banks didn’t open, and when they did only 60 EUR per day was allowed to leave. Don’t be like the Greeks, buy Bitcoin. 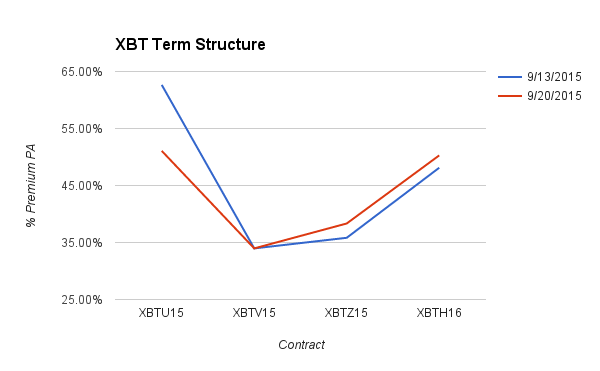 Price volatility was muted last week which meant the term structure did not experience much change. XBTU15 continues to be the most expensive future in terms of basis. That is due to the liquidity premium. If price volatility returns to Bitcoin this week, XBTV15 should experience a basis pop. It will be the front month future as of Friday, and it trades at the cheapest basis. Consider selling XBTU15 and buying XBTV15 to take advantage of a curve steepening. XBTH16’s basis has shown the most stability recently. It has traded in a 5% point range for the last month. Another way to benefit from a rise in XBTV15’s basis is to buy XBTV15 and sell XBTH16. This trade has positive carry (or positive Theta) so even if your prediction is wrong about volatility returning, you will earn the basis differential because XBTH16’s basis is higher than XBTV15’s. That way you can exit the trade with a slight profit if the market stays comatose.

The first installment of our series of lessons on basis trading was published last week, Bitcoin Futures Basis Trading, Lesson 1. This was a discussion on the time value of money and how to compare futures rich or cheapness by looking at the annualised percentage basis. Lesson 2 will deep dive into the different curve structures and appropriate trades to implement given certain situations.

After a very boring weekend in terms of price action, Bitcoin awoke and dropped $5. The price is solidly below $230, and the new range is $225-$230. The ranges have gotten tighter and tighter, and the time spent in a sideways motion has increased. The breakout whether higher than $235 or lower than $225 will be violent.

Bitcoin is in a wait and see mode while the global markets digest the historic September FOMC. The chop will continue until traders decide whether NIRP and more QE is a short term positive or negative for Bitcoin. Absent a clear break out, going long when spot is $225 and short at $235 is a reasonable strategy.