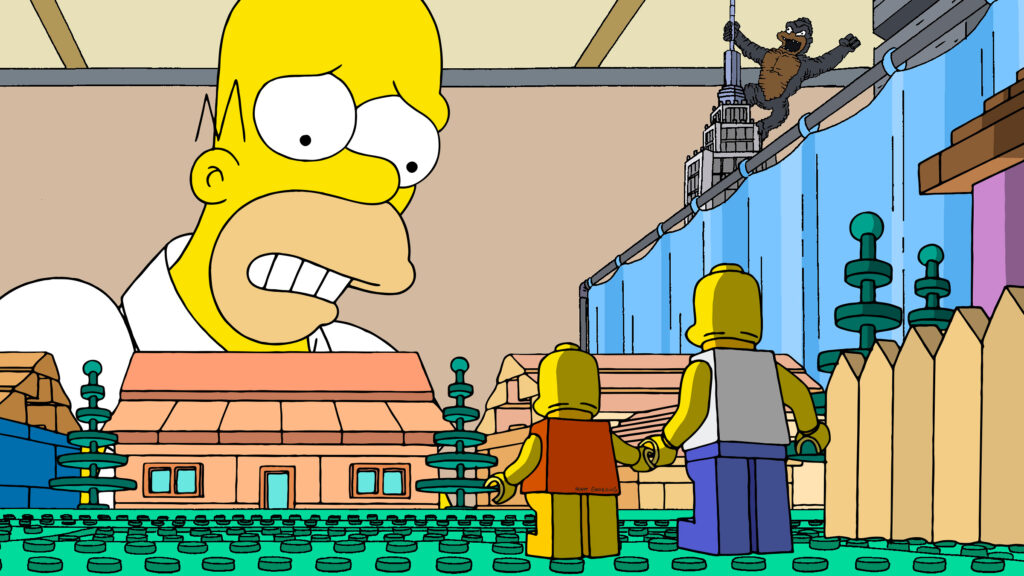 Arthur: Hi Garry (VC), I want to tell you about a pivot we just made. BitMEX is now BlockMEX, we allow trading of Blockchain Derivatives.

VC: Oh that’s great. You know we are not that interested in Bitcoin, but very positive about the Blockchain. Please tell me more.

Arthur: Clients use Blockshares to trade on BlockMEX. And we allow the trading of financial derivatives using the Blockchain.

VC: Wow that’s awesome. So you no longer use Bitcoin? You were previously called BitMEX right?

Arthur: We never were a Bitcoin company. The “Bit” merely stood for digital information, you know like Bits and Bytes.

VC: Gotcha. So what kind of Blockchain do you use for your derivatives, do you touch Bitcoin in any way?

Arthur: Touch Bitcoin, oh heavens no. We created our own Blockchain that uses Blockshares. It is proprietary to BlockMEX.

VC: Wow, you created your own Blockchain? I’m really impressed. So if anyone can trade anything using the BlockMEX Blockchain, how do regulations work?

Arthur: Regulations are irrelevant with the Blockchain. It’s all decentralised, so no legacy regulations apply to BlockMEX.

VC: Man, the Blockchain is so amazing. So what about trading volumes?

Arthur: We have not done a single trade on BlockMEX yet. That’s okay, we’re just pre-revenue. Our technology is meant for large financial institutions. We are going to revolutionise how they trade derivatives.

VC: I totally agree that legacy finance needs services like yours. What about your team? Finding good Blockchain engineers is getting harder and harder.

Arthur: Our team is top notch. We have expert MySQL and PHP developers straight from Tokyo. They have been involved with the Blockchain since 2010.

VC: I really think you guys are onto something. How can our firm, FOMO Capital, get involved?

Arthur: On the back of our strong traction, we are raising $116 million at a $500 million valuation.

VC: That sounds very reasonable. FOMO Capital typically writes checks for $50 to $100 million. We are interested in leading your round.

How do Chinese Bitcoin exchanges make money when they charge no fees to trade spot? When asked, management of the big three (OKCoin, Huobi, and BTCC) assure us that they do indeed make money. In this post, I will conduct a thought experiment as to how I would monetise a spot business that charges zero fees in China. I have no concrete evidence to back up any of my claims other than deductive logic.

China accounts for the vast majority of all on-exchange Bitcoin trading. Exchanges must therefore have a large balance of customer CNY and Bitcoin. I believe that Chinese exchanges act as shadow banks. They borrow at 0% from clients who wish to trade Bitcoin, and lend out customer funds by purchasing China debt instruments.

When the product is free, you are the product. Chinese Bitcoin exchanges use the captive CNY held to trade Bitcoin to earn interest income. How much does it cost to operate the exchange? I have no hard data, but the big three generally have around 150 staff. Assume an average salary of 10,000 CNY per month. Demand deposits yield between 3% to 5%; this is the least risky form of lending as it can be redeemed at any moment from the bank to satisfy withdrawals. The yearly salary costs alone are CNY 18 million. To earn that amount in interest income at 5% requires CNY 360 million or $56 million of stable customer funds. Given the reported trading volumes, it is reasonable to assume that the big three could each possibly hold this amount of capital.

Unfortunately only investing using demand deposits just barely covers salaries. If the exchange is to turn a profit, they must step out on the risk and maturity curve. Private companies cannot obtain credit from banks. All bank credit is reserved for State Owned Enterprises (SOE). In the last decade, high interest rate Wealth Management Products (WMP) have emerged to provide credit to SMEs. The banks underwrite these WMPs off balance sheet which are secured on a company’s assets. WMP yields range from 10% to 20% and have various maturities. Investors believe there is an implicit guarantee provided by the issuing bank. The belief is the government would not let WMPs fail because of the catastrophic losses retail investors would suffer. Therefore, in the few cases where it appeared a company would default on a WMP product, the banks have stepped up and rolled the debt.

Like any bank, a Chinese exchange must keep a portion of the float liquid so they can’t lend the entire balance out via WMPs. The below table assumes that the Demand Deposit rate is 5% and the WMP rate is 20% per annum. NIM is the Net Interest Margin, which in this case is the full interest rate since customers are paid nothing on CNY they hold with the exchange.

As the table shows, the more credit and maturity risk management is willing to take the more money they make. Given there is no regulation as to how the exchange holds customer funds, management can invest in whatever they like to generate a positive NIM. It is not a far stretch to imagine the CEO’s punting the A share market in their spare to time to generate enhanced returns.

Bitcoin trading has become a side show, and these entrepreneurs have created very profitable banking institutions. Because they have excess cash, they are able to pledge customer CNY to fund whatever assets will generate a positive risk adjusted NIM. The Chinese Bitcoin exchange model will be copied in other emerging markets with broken credit intermediation and high nominal rates of interest. If I was opening a spot Bitcoin exchange in India, this is the model I would choose. Private credit in India is hard to come by, and nominal rates are sky high. 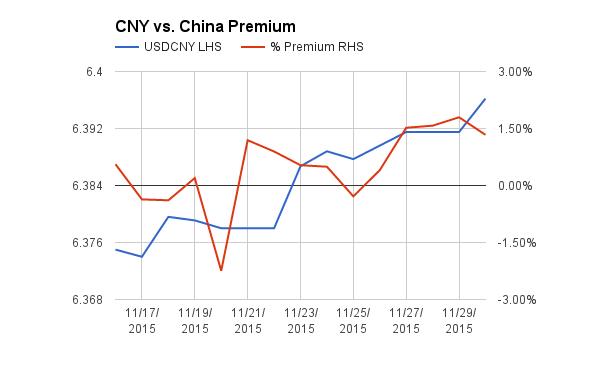 The IMF is set to announce the CNY’s inclusion into the SDR basket today. Analysts expect that after the inclusion, the PBOC will intervene less in the FX markets and allow the CNY to depreciate further. 6.4 is the highest level USDCNY reached this summer after the shock devaluation.

If USDCNY rises above 6.4, the dominoes may begin to fall. The expectation of future weakness will become more acute. Ordinary citizens will search for any means to preserve their purchasing power. The Bitcoin meme is gaining ground in the financial media. Zerohedge mentions Bitcoin daily when talking about the Chinese financial markets. Once the mainstream pundits at Bloomberg, FT, and WSJ discover Bitcoin, make sure you have your moon boots ready.

Apart from the Federal Reserve meeting December 16th, nothing else will have more impact on Bitcoin than the USDCNY exchange rate. The above chart shows the Bitcoin premium expansion as CNY has depreciated (as USDCNY rises, CNY is worth less USD). To check the PBOC’s daily USDCNY interbank rate click here. If you are lucky enough to have access to Bloomberg or Reuters, search for the USDCNY daily fix. It is announced each day at 9:15am Beijing Time GMT + 8.

$400, here we come. Global macro is providing so many positive catalysts for Bitcoin it is hard to keep them all straight. Argentina has descended into currency chaos. The CNY depreciation continues. The Fed is expected to lift rates and torpedo asset markets globally.

Yet – $400 won’t be taken as easily as it was one month ago. The retrace from the graces of $500 has been slow and steady. However, the recent price action contains the wiff of FOMO, and the upward pressure is likely to accelerate if the CNY devaluation continues.