Forget Greece, How Will Bitcoin React To A Fed Rate Hike?

With all the noise about a possible implementation of capital controls this weekend in Greece, the latest FOMC (Federal Reserve Open Market Committee) meeting was overlooked. The 21 million Bitcoin question is when will the Fed finally raise rates, and how will the global financial markets handle non-zero USD short-term rates?

The Fed Funds rate has been at 0% for over 6 years. Due to the strong US economy (if you believe the US government isn’t juking the stats), the Fed now must attempt to re-introduce the time value of money. Many economists expect the first 0.25% to 0.50% rate hike in the fall of this year. The USD rally that started late last year, will take on a whole new dimension with positive interest rates. For currencies and commodities priced in USD, a positive short term interest rate could spell carnage. Bitcoin will not escape the strong dollar armageddon.

After the initial shock and awe of a positive Fed Funds rate, will the ensuing market carnage will force the Fed to reverse its policies and reinstitute open ended quantitative easing (i.e. money printing). This is the opinion of some market observers and hedge fund managers. If he one-two punch of a rate hike then QE 4eva occurs, the initial dip in the Bitcoin price represents a golden opportunity to increase long exposure. The FOMC Fall 2015 schedule is September 16-17 and October 27-28. Emperor Bernanke (POTUS Obama is merely a King) began the habit of pre-announcing major Fed policy decisions at the annual Jackson Hole summit held in late August of each year. Expect very definitive guidance as to the timing of the rate hike from Empress Yellen at this years Jackson Hole Summit to be held August 27-29th.

A trading strategy involving December 2015 and March 2016 BitMEX futures contracts allows traders to profitably trade this view. Consider selling XBUZ15 (25 December 2015) aiming to cover the position shortly after the announcement of a rate hike. During the dislocation, spot Bitcoin could trade with a $1 handle again. Given the already depressed nominal price levels, expect the price fall not to last long. Cover the XBUZ15 short position, and then go long XBTH16 (25 March 2016). 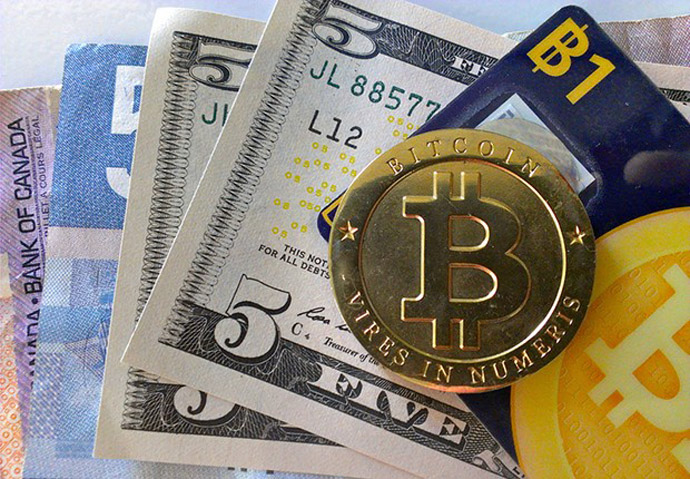 The war on cash in the US and EU is in full force. Forbes recently wrote a story about the Drug Enforcement Agency in the US stealing the life savings of a college student without any criminal charge. France now restricts cash transactions to 1,000 EUR. First world countries are conditioning their populace through theft and cash transaction limits to hold their wealth digitally in national banks. Citizens who are unbanked in first world countries are doubly screwed as they have no means of protecting their cash from rapacious police officers. What many want is a synthetic USD or other fiat currency that is under the complete control of its rightful owner.

Bitcoin is outside of governmental or banking control. Trust is instead placed in cryptography and a decentralised network of computing power (miners). The only downside from a wealth preservation perspective is the price fluctuation vs. your domestic currency. Using Bitcoin and BitMEX futures contracts it is possible to create synthetic USD. This USD can be stored outside the traditional banking system, and your funds can be accessed anywhere globally with an internet connection.

Here is a step by step guide to creating synthetic USD:

If you intend to frequently spend your synthetic USD, sell a shorter dated futures contract. The shorter the maturity the more liquid the futures contract. Your counterparty risk is limited to the amount of margin placed on BitMEX (the minimum for our hedging contracts is 20%). The entire process takes under 30 minutes to complete. Regardless of where you take your synthetic USD, there are people or exchanges that will allow you to exchange Bitcoin for a domestic fiat currency. E.g. if you travel to France, you exchange USD (by selling Bitcoin) for EUR. Creating synthetic USD with Bitcoin and BitMEX products provides all the benefits of physical cash without the headache of carrying it around on your person.

Wallet providers can simplify this process. Once Bitcoin is deposited, a “lock value” option is presented. A BitMEX account is created for a specific address by signing a message on the Blockchain. Bitcoin is deposited instantly with BitMEX and the appropriate futures hedge will be automatically executed. We are interested in working with any wallet providers who would like to offer this feature. Please contact us, and we can speak further about a partnership.

How The DEA Seized A College Student’s Entire Life Savings, Without Charging Him With A Drug Crime 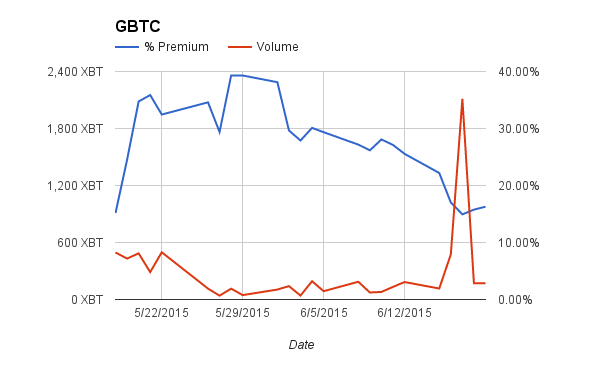 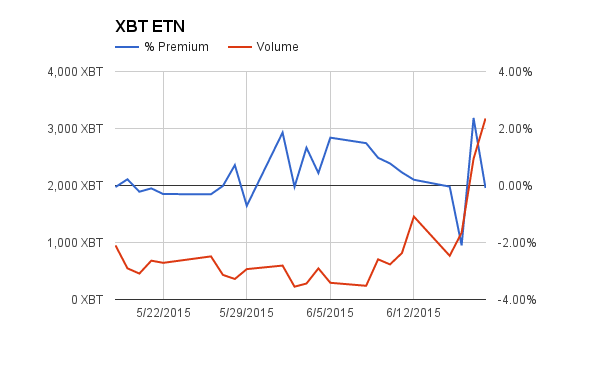 The ramp to $260 ignited a fire under GBTC and XBT. Both products experienced all time high trading volumes this past week. GBTC traded over 2,000 XBT on Wednesday, and XBT traded over 3,000 XBT on Thursday. XBT is fast becoming one of the most traded ETN’s on the Nasdaq Nordic OMX exchange. Interactive Brokers will now allows clients worldwide to trade XBT; the ticker is COINXBT.

Is Litecoin The Bitcoin Oracle? 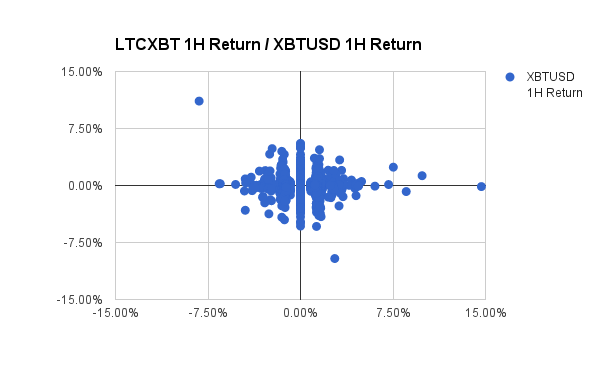 Do Litecoin moves predict future Bitcoin ones? Many traders believe so and keep a close eye on Litecoin price action. I have conducted analysis on whether the one, three, and six hour LTCXBT return can predict the XBTUSD return for a similar time period. I used the hourly VWAP (Volume Weighted Average Price) data from Bitfinex for both currency pairs from January to June 2015.

The next hypothesis was given LTCXBT had an above average positive return (in this case one standard deviation above and below the sample mean) could I predict if XBTUSD in the next period, would have a positive return as well. Using the sample mean and standard deviation at the different time intervals, I observed the sample probability for a positive and negative return. The above table displays the results. The best predictor was if the previous six hour LTCXBT return was negative, 58% of the time XBTUSD’s next six hour return would be negative as well. LTCXBT returns on a short time scale are somewhat helpful in determining the future path of Bitcoin. However, they are not the silver bullet that some traders believe them to be.

Bitcoin finally exhibited a pulse, and leapt furiously towards the all important $260. Many armchair quarterbacks ascribed the move to the latest machinations out of Greece. However, the more likely cause was it was just time for Bitcoin to move a little. Technical resistance levels at $240 and $250 were laid to waste, but Bitcoin could not climb the final mountain to $260. Traders FOMO bought Bitcoin right up to $259, and then were promptly Rekt. The price fell as quickly as it rose through $250 almost breaching $240 within two trading days.

Range set in at the $240 to $245 level. As this newsletter is going to press the price broke out of the range and looks to retake $250. A solid break through $250, and the $260 resistance level will be reattempted. A second failure to breach $260 could spell trouble for the bulls. $220 where we were only weeks ago, could become a reality again quite quickly.