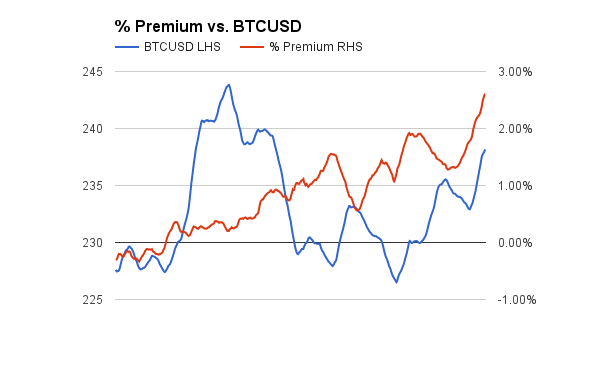 During the November 2013 Bitcoin bubble, the belief was that Chinese people would rush to convert their RMB into Bitcoin to escape the financial repression they faced at home. That did not come to pass as it was still very easy and cheap to spirit capital out of China. That all changed this summer when the PBOC shocked the world by devaluing the CNY by 4% over one week.

The PBOC did not stop there. The Chinese government is aggressively trying to stem the capital flight out of China. Many real estate commentators have lamented how Chinese buyers have slowed down the pace of property purchases because of the increasing difficulty they face exporting their RMB.

In my article Hello Bitcoin: China Begins Enforcing Capital Controls, I speculated on the potential impact on the Bitcoin price if for the purposes of real estate Chinese buyers began using Bitcoin to export their wealth.

The first signs of a possible shift of wealth from China outwards through Bitcoin will be the premium of BTCCNY to BTCUSD. The above chart shows the 24 hour moving average of the premium between Bitstamp (BTCUSD) and OKCoin (BTCCNY) over the past 30 days. While the absolute premium at the present moment is not large, the trend is up and to the right. I plotted the premium against the price of Bitcoin. The two exhibit no correlation over this 30 day time period; however, I predict that if premium continues to rises, it will lay the groundwork for a moon shot.

In the 3% to 5% premium range, it becomes worthwhile to buy offshore, sell onshore in China, and remit money between China and Hong Kong. The difficult step is bringing CNY from China into Hong Kong. If you cross the border between the two territories the legal limit is 20,000 CNY (3,000 USD). At a 5% premium that is a 150 USD gross profit before exchange fees and bank wire fees. That isn’t compelling. This trade needs to be done in a size >$10,000 on a daily basis and electronically. Previously there certain individuals who would take CNY onshore in China and remit you HKD or USD offshore into Hong Kong in any size.

If truly the traditional avenues of moving money between China and Hong Kong have been shut, then the premium will rise above 5%. That presents a clear signal that there is an imbalance of demand to sell CNY and buy Bitcoin. That is when the rocket ship will ignite.