BitMEX launched the world’s first Bitcoin historical volatility futures contract called BVOLG15. The contract settles at the BitMEX 30 Day Historical Volatility Index (.BVOL Index) price. This post will serve as a postmortem describing the trading behavior of the first contract, and hopefully further educate traders as to how they can incorporate BitMEX volatility futures contracts into their portfolios.

.BVOL Index measures the annualised standard deviation of the % move between Time Weighted Average Price (TWAP) calculations done on Bitfinex every day from 10:00 GMT to 12:00 GMT. Because .BVOL Index comprises 30 days of price changes, there must be a total of 31 price increments. For BVOLG15, that meant the observation period lasted from 27 January 2015 to 27 February 2015 inclusive.

BVOLG15 was listed on 5 January 2015, meaning for three weeks traders were placing bets purely on their expectations of future realised volatility. Each day after 27 January 2015, a clearer picture was formed as to where 30 day volatility would realise by expiry. 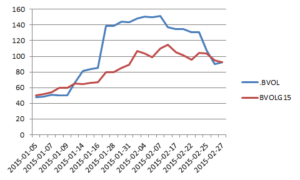