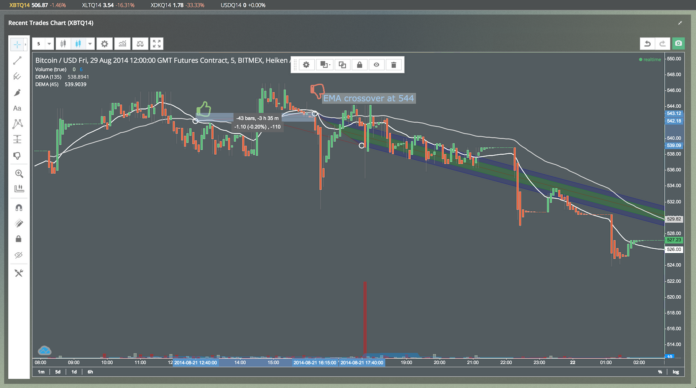 The BitMEX Trading Challenge II concluded on September 26, 2014. The addition of some new type of futures contracts added a bit of complexity. We hope that traders learned some valuable lessons that they can employ when BitMEX goes live in late October.

The overall winner of the contest was a trader by the username crispyape, who had a total profit of 349.4332 XBT. Below is a table of the top traders:

The next prize of 0.5 XBT was awarded to the trader who had the highest profit accumulated from trading USDU14 and USDZ14. Crispyape again took the top spot with a profit of 199.8456 XBT. Below is a table of the top traders on the USD futures chain:

The final prize of 0.5 XBT was awarded to the trader who had the highest sharpe ratio and also had a positive overall PNL. We calculated the sharpe ratio by taking a trader’s overall profit and dividing that by the standard deviation of their profit measured in 8 hour segments. Urielscott won with a sharpe of 0.6240939. Below is a table of the top traders:

Thank you to everyone for participating. The trading games have ended for the time being. We will still allow paper trading, and will enable testnet Bitcoin deposit and withdrawals. The full exchange will go live in late October. If you have any interest in market making, please contact support@bitmex.com. BitMEX has a very generous and comprehensive market maker reward scheme in place for those who qualify.