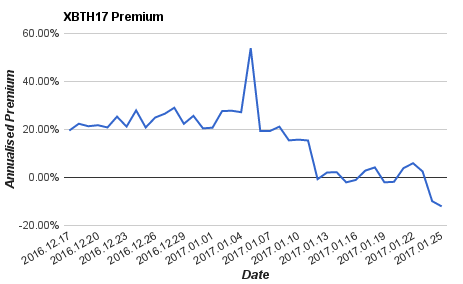 The problem with shorting a deflationary asset: unlevered, the maximum you can make is 100%. When longing, the maximum you can make is infinity. Helping the case for bulls is the fixed supply of Bitcoin. Leveraged speculators prefer to go long Bitcoin rather than short. As a result, quarterly Bitcoin futures usually trade at a premium (positive basis) to the spot price.

It is puzzling to many why BitMEX March 2017 Bitcoin / USD futures contracts, XBTH17, currently trade at a discount to the spot price. The same has been true of OKCoin quarterlies. This phenomenon is called backwardation. It is even stranger considering the impressive bull-run Bitcoin has experienced over the last year.

Why are quarterly futures are in backwardation? When will the curve normalise? I will attempt to answer these questions, but the result is speculative; I am using only publicly available information and logic to arrive at this hypothesis.

What Is Bitcoin Good For?

What can one do with Bitcoin after it is purchased? If you don’t use it as collateral to gamble or place speculative trades, most Bitcoin lies dormant in a wallet. Bitcoin as a means of payment is still in its infancy.

Holders constantly search for ways to earn a return on their Bitcoin. No sovereign governments, banks, or companies borrow in Bitcoin yet. Therefore there are no “safe” fixed-income Bitcoin products.

To meet this need, savvy entrepreneurs have set up funds that pay a guaranteed daily rate of interest if you invest Bitcoin. These funds are based purely on trust. They are especially popular in China. Figures well known in the industry would leverage their personal brand to get holders to invest in their funds. I commonly saw 0.01% per day offered.

Depending on your personal network, you could also borrow Bitcoin from large miners or holders and pay them interest as well. If you are able to take down a large size, you may borrow cheaper than 0.01% per day.

What safe investment pays out a daily nominal return in Bitcoin over 0.01%? Prior to this week, I assumed that most funds invested in mining operations. But now I have another theory.

The major Chinese exchanges (BTCC, Huobi, and OKCoin.cn; aka The Big Three) operated popular P2P margin platforms. Users lent each other Bitcoin and CNY, allowing the exchange to offer margin trading. The lenders would earn a healthy return without taking any Bitcoin price risk.

Sell a portion of the Bitcoin for CNY. I will assume 50% of Bitcoin assets are sold.

In the past, XBTH17 and other competing quarterly futures contracts have traded at a premium to spot. Assume that you buy at an annualised premium of 20%, this then means that you effectively pay 0.055% per day. On a blended fund basis (remember you only used 50% of assets), you pay 0.0275% daily.

Lend the CNY on a margin trading platform. Assume you can lend your CNY at 0.1% per day on one of the big three Chinese exchanges. On a blended fund basis, you receive 0.05% per day.

If you have 10,000 Bitcoin under management, you earn a profit of 1.25 Bitcoin per day. You can increase daily earnings by increasing the amount of Bitcoin assets sold for CNY. If you sold 75% of assets, your net carry would be 0.02375% per day.

After three months, the futures contracts will expire. At that point, you must long roll your contracts into the next quarterly. The spread between the two contracts represents the cost of carry for the next three months.

It is necessary to understand the mechanics that fund-operators must undertake when they pay back investors.

The price of Bitcoin rises to $2000 and at that point the investor recalls his loan. The operator must return 2 XBT.

The important fact is that he must sell futures and buy spot, which at the margin causes basis to fall. If too many investors unwind at the same time, the falling basis will move a futures contract into backwardation.

From 24 December 2016 to 5 January 2017, the price of Bitcoin went from $800 to over $1,200 equivalent in China. Volumes spiked and bulls were borrowing everything in sight to go long Bitcoin. To satisfy the demand the CNY need to come from somewhere. I don’t believe exchanges were re-hypothecating customer CNY. I believe the increased CNY demand was met by credit whales operating in the manner I describe above. The hedging pressure from credit whales and Bitcoin bulls caused the XBTH17 premium to reach 54% annualised on January 5th.

All of a sudden, the PBOC turned on the lights at the club. In response to pressure from regulators, Chinese exchanges ceased offering margin trading on January 11th. The very next day, XBTH17 entered backwardation. Existing loans were allowed to expire, but no new loans could be taken out.

Margin loans had 2 to 30 day terms. As loans expired, credit whales need to unwind their trades. That meant selling futures and buying spot with released CNY. This helped move the futures’ basis into backwardation.

The Fear Uncertainty and Doubt (FUD) surrounding what the PBOC would or wouldn’t do prompted speculators to short Bitcoin via futures. There was no more margin trading therefore futures were the only bearish instrument available. Even today, the PBOC has released no statement as to what policy actions will be undertaken as a result of their “investigations”.

By mid-February all margin loans will expire. Afterwards, selling pressure will be removed.

If the PBOC does not say anything directly pre or post Chinese New Year, it will be safe to assume the exchanges heard and heeded the intended message. The FUD selling pressure will cease.

The basis will slowly creep higher as longs regain confidence and bargain hunt. A violent short squeeze could happen, should one of these three following black swan events transpire before the expiry of March 2017 futures:

Bitcoin will respond positively if any of these scenarios come to pass. If you believe these situations are remotely possible, it behooves you to begin building a long XBTH17 position and take advantage of the backwardation.