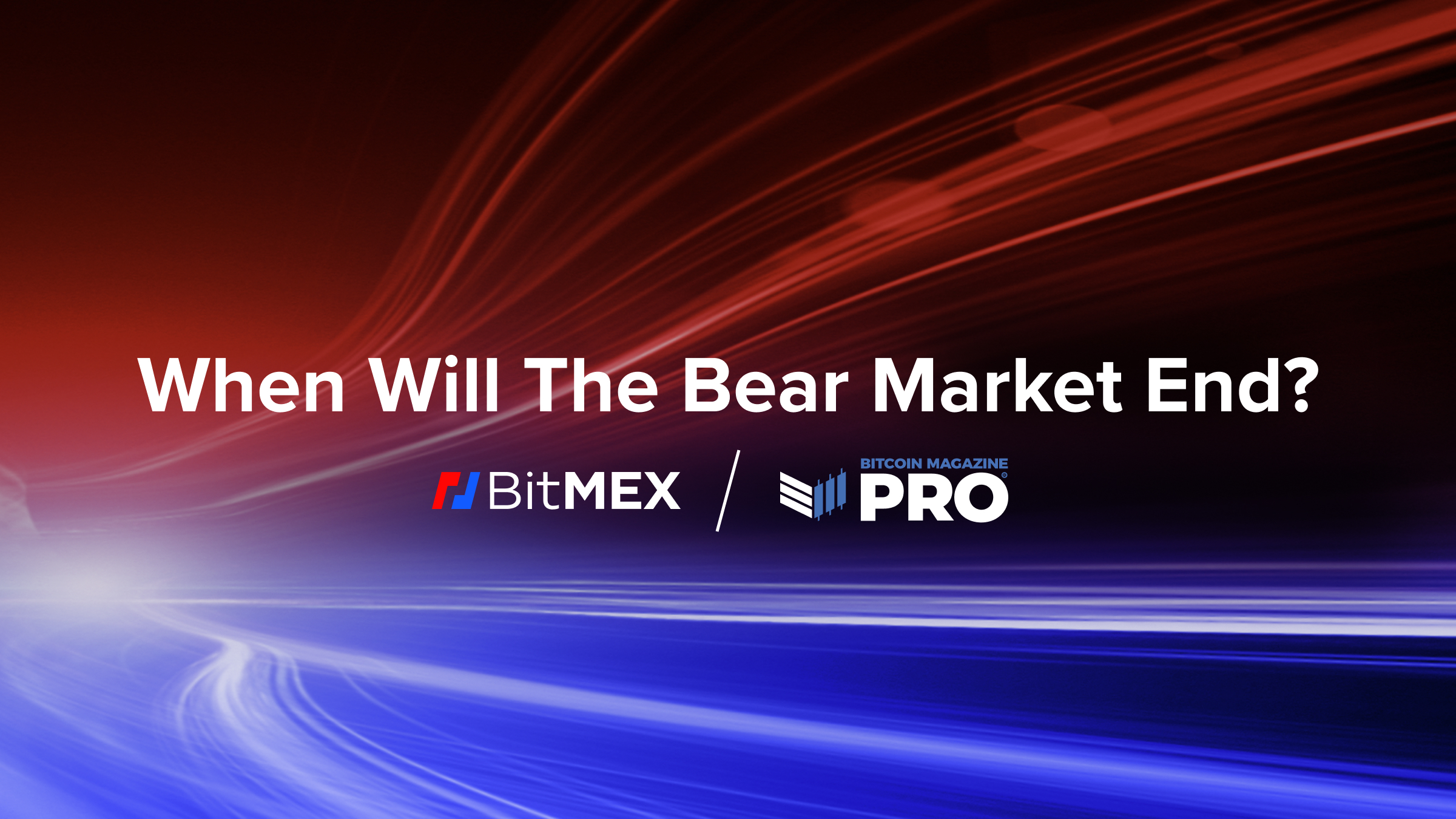 This article is part of our new series of crypto research content, produced by Bitcoin Magazine team and sponsored by BitMEX. To learn more about our wide-ranging partnership with Bitcoin Magazine, click here.

In today’s issue, we will cover historical bear markets in bitcoin, and differentiate from what we believe are two distinct phases of the classical bear market.

Let’s cover both of these phases with visuals and data derived from the blockchain.

While much has been written about the macroeconomic backdrop regarding the bitcoin market (with our analysis assuredly included), this bitcoin cycle ironically does not look all that different from the cycles of the past.

At the time of writing, bitcoin is 69.72% below previous all-time highs, with the peak of the drawdown reaching 71.86% on May 18. Bear markets of bitcoin’s past saw drawdowns of 93.08%, 84.82% and 83.47% respectively. With this in mind, despite the absolute size of this cycle’s drawdown dwarfing previous cycles, in relative terms this was nothing out of the ordinary for bitcoin. 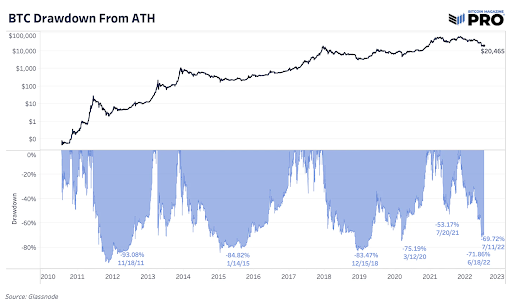 Another staple of our analysis is the realized price/market capitalization metric. Realized market cap aggregates the price of every bitcoin when it last moved on-chain, to come up with a “fair” value for bitcoin, or for realized price, an “average” cost basis.

Every significant drawdown in bitcoin’s history has seen price breach the realized price level, signifying that on average, bitcoin holders are underwater as per the last price that every coin (technically: UTXO) was transferred.

When the average holder of bitcoin is underwater, despite the parabolic gains seen across longer time frames, we view this as a classic price-based capitulation event.

More can be read about this metric here. 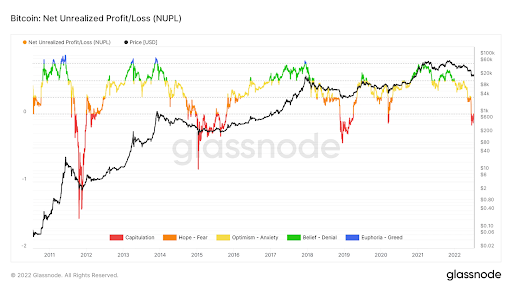 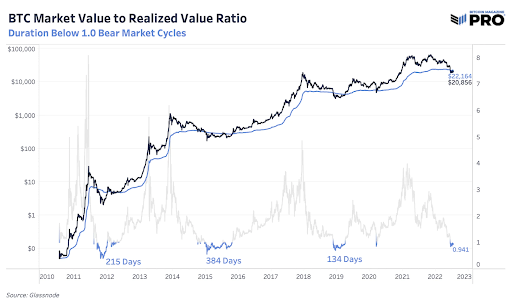 It is also worth noting that as price falls, and market participants capitulate at a loss, the average cost basis (realized price) falls. To contextualize this decline in “fair” value of bitcoin, the history of realized price drawdowns is shown below. 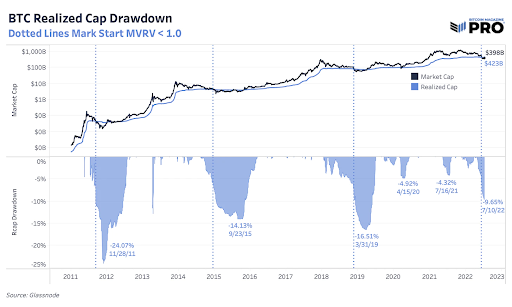 Bear market cycles take time to play out and vary in length depending on how you define them. Looking at the other three key bear market cycles and measuring them by the Market Value To Realized Value Ratio, price was below realized price for an average of 244 days. (That estimate excludes the March 2020 period in the third bear market.) Currently, we’re at less than 30 days with the price being below realized price. This is of course a small sample size across bitcoin cycles but it gives us context on the length and duration of previous bear markets. 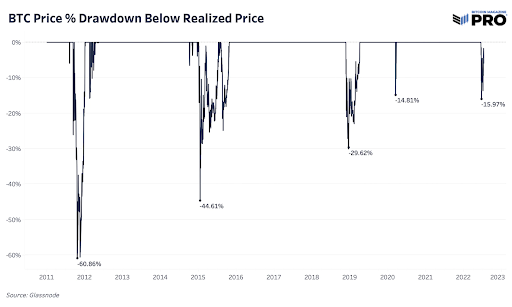 While the drawdowns continue to become less severe in percentage terms relative to the average holder’s cost basis, past performance is not indicative of future returns. Statistics such as realized price are useful for crafting a framework for market participants to evaluate the future range of possibilities.

On that note, we show a comparison of bitcoin’s current path with that of the previous bear market, mapping bitcoin’s price relative to the realized price (Market Value To Realized Value Ratio) to present readers with a hypothetical scenario to end today’s issue with. Shown first are the Market Value To Realized Value Ratios of the two respective cycles from the moment that price fell below the average holder cost basis. Shown second is the same graphic mapped with today’s exchange rate. 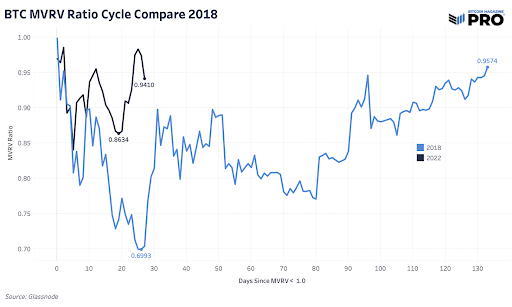 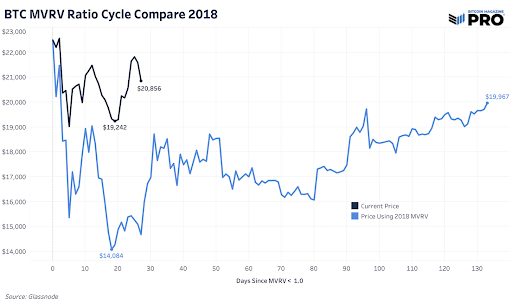 In all likelihood, the brunt of the largest capitulation event in the history of bitcoin has just occurred. More balance sheet contagion is certainly on the table (rather hiding under it), and the macroeconomic environment looks increasingly ugly. Holders should buckle in, not just in case of more severe market downturns, but the arguably more painful possibility of extended sideways action together with lower prices and plenty of sideways chop as coins are transferred from weak hands to strong hands, and from the impatient to the convinced.

Bitcoin is here to stay. Your job is simply to survive.

To be the first to know about our contracts, new listings, product launches, and giveaways, you can connect with us on Discord, Telegram, and Twitter. We encourage you to also enter our spot trading sweepstakes and subscribe to the Bitcoin Magazine Pro newsletter.