Abstract: In this piece we review and analyse Bitmain’s financial data, which was made available (or leaked) as part of the pre-IPO process. The figures indicate Bitmain was highly profitable and cash generative in 2017, but may currently be loss making. Bitmain also spent the majority of its operating cash flow acquiring Bitcoin Cash and may have suffered mark to market losses of US$328 million as a result. We conclude that the IPO itself may go well, however going forwards the allocation of investor capital will be key and management may need to improve in this area. 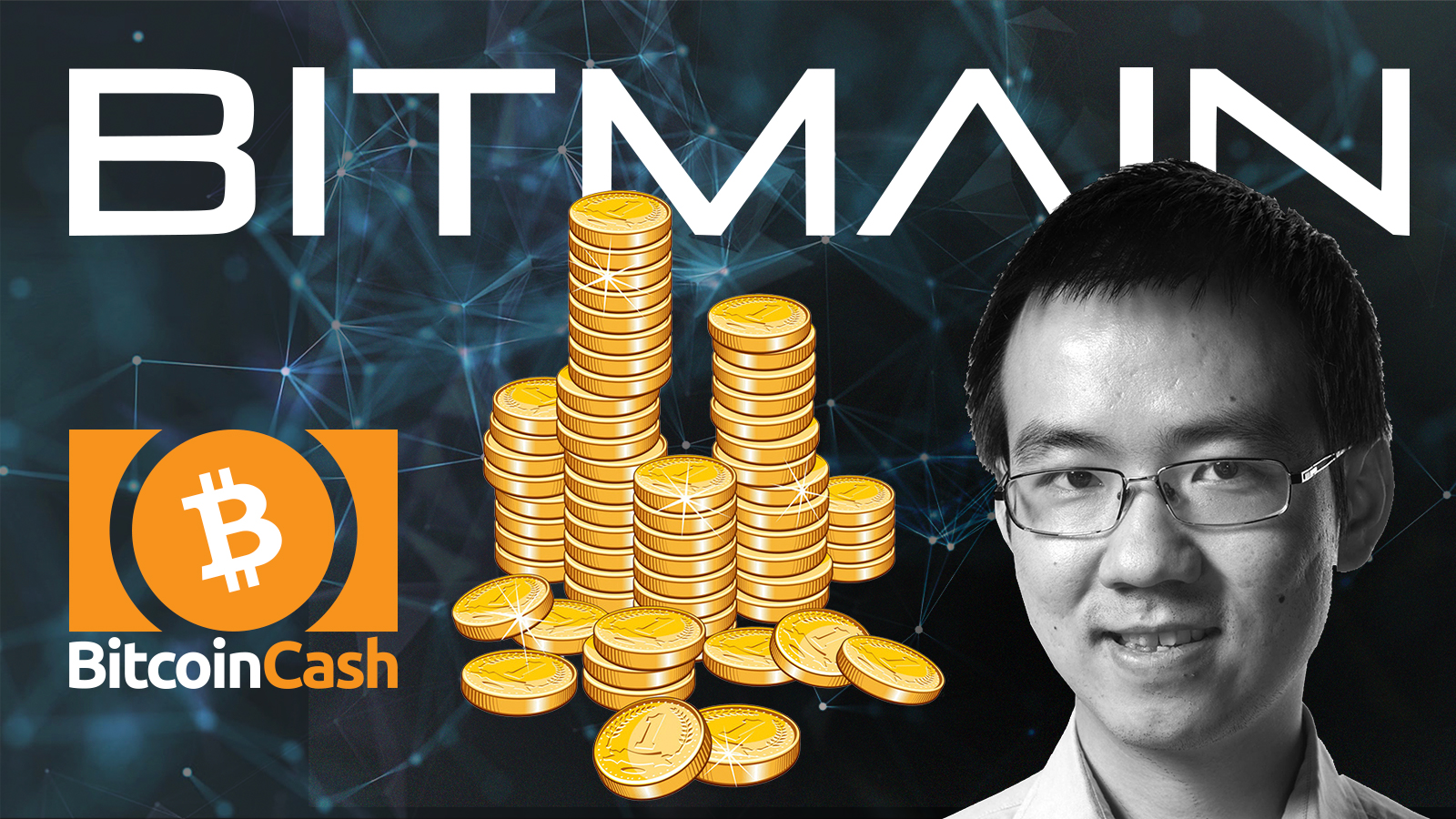 Bitmain expects to submit IPO documents to the Hong Kong Stock Exchange at the end of August 2018, with a public listing expected towards the end of 2018. The company has just conducted a pre-IPO round, raising several hundred million dollars at a valuation of around $14 billion. Therefore we believe the company is likely to attempt to raise several billion dollars at the IPO stage, with a valuation north of $20 billion.

Documents outlining this process, which also contain Bitmain financial data, have been leaked on Twitter. We have reason to believe the authenticity of these documents, which forms the basis for this report.

Bitmain’s position in the mining industry

Will there be demand for the IPO?

Bitmain has a strong or dominant position in most areas in cryptocurrency mining, as the table above illustrates. Bitmain is likely to be the largest and most profitable company in the blockchain space, which is likely to make the company attractive to many investors.

In the last few years and decades the key lesson many technology investors have learnt, rightly or wrongly, is to always invest in the number one company. The number one company typically benefits the most from network effects and as a result smaller rivals tend to fail. The below list of usual suspects illustrate this basic point:

Justified or not, the blockchain space is now regarded by many as one of the next big internet based technologies and Bitmain is the number one player in this space. Whether this network effect type logic can apply to ASIC design and distribution is not clear to us and the benefits of being big may be limited to the more traditional economies of scale. We think it is important to not only look at cryptocurrency mining through the technology lens, but also to look at it from the angle of an energy intensive industry, like mining for natural resources. In these sectors the benefits of scale are more limited than for internet based networks. Therefore we don’t completely agree that one should blindly invest in the largest cryptocurrency mining entity, we just think than some investors, perhaps naively, may think this way.

As we alluded to above, one of the most interesting discoveries in the Bitmain pre-IPO documents was the sharp decline in Bitmain’s own mining farm business. Although the share of revenue has dramatically fallen, in absolute terms own mining revenue still grew by 250% in 2017, its just that the 948% growth in equipment sales overshadowed this. 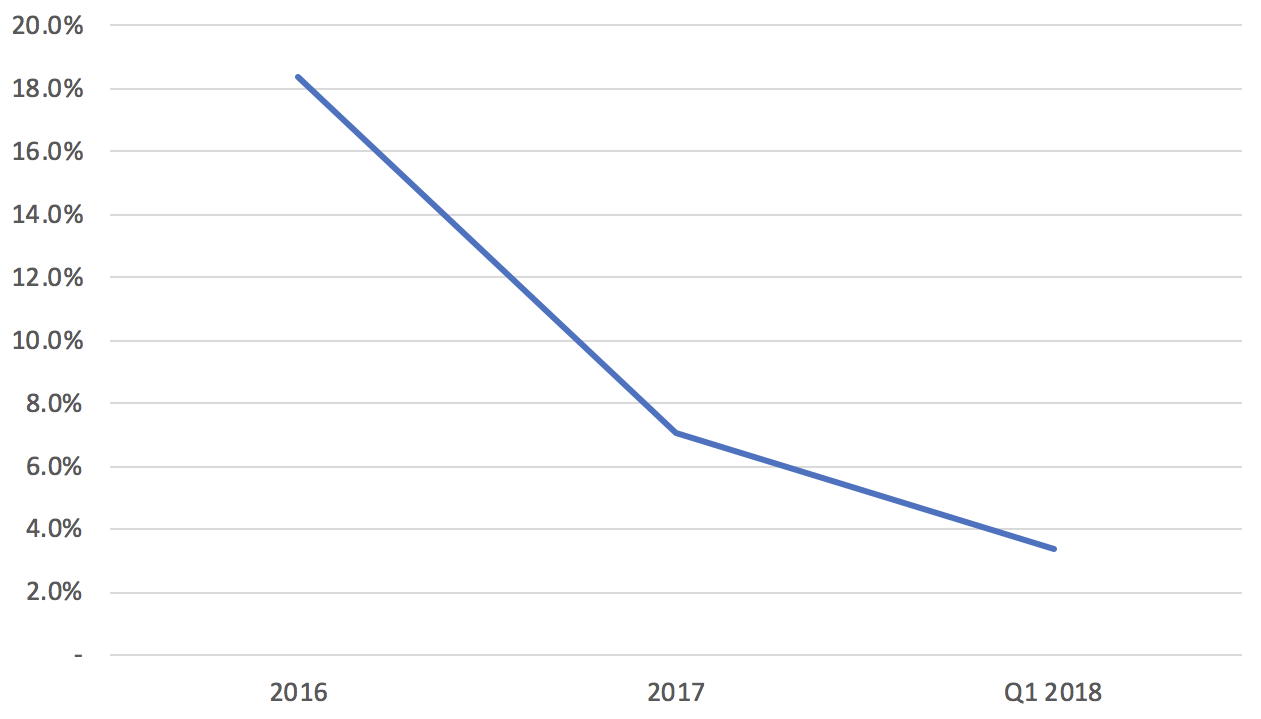 We believe this decline represents a smart strategic decision by Bitmain to divest (relatively speaking), from an increasingly competitive and lower margin area. In our view, as one moves down the mining supply chain, the competition is likely to increase faster and Bitmain made a sensible move by trying to focus their efforts up the chain, where an increasingly large proportion of the value from mining may accrue. In some ways this is good news for Bitcoin decentralisation, as a dominant mining player has stepped back. We believe ASIC design and distribution is less critical to network security than mining farm operation, which in theory choose the pools who construct blocks and select which blocks to build on top of. Of course Bitmain’s power and dominance in the ASIC space still remains as a significant problem for Bitcoin.

Currently Bitmain are likely to be making losses

In the documents, Bitmain disclosed the revenue, sales and crucially gross profit margin for each of the main mining products. We have displayed the relevant data in the table below. The data shows that Bitmain sold over a million S9’s in 2017 and then over 0.7 million in Q1 2018 alone.

Using the disclosed gross profit margin from 2017, we calculated the implied cost price of each machine. Assuming these costs remain unchanged (which may be unrealistic), we were able to calculate gross profit margins based on the latest prices on the Bitmain store. This analysis implies Bitmain are currently loss-making, with a negative profit margin of 11.6% for the main S9 product and a margin of over negative 100% on the L3 product. In reality costs are likely to have declined so the situation may not be as bad, however we think it is likely Bitmain are currently making significant losses.

These low prices are likely to be a deliberate strategy by Bitmain, to squeeze out their competition by causing them to experience lower sales and therefore financial difficulties. In our view, herein lies the key to one of the main driving forces behind the decision to IPO. A successful IPO may increase the firepower available to continue this strategy and eliminate an advantage rivals could have by doing their IPOs first.

Another reason for these low prices and apparent losses may be that Bitmain has too much inventory on the balance sheet. As at March 2018 Bitmain had $1.2 billion of inventory on the books, equal to 52% of 2017 sales. Bitmain may therefore have had to suffer inventory write downs, which could have generated further losses in addition to the loss making sales.

Use of operating cash flow and balance sheet

The documents contain summary balance sheet data. On the positive side is that Bitmain has no debt and the company was highly cash generative in 2017. The negatives include:

One of the key assets of the company is its portfolio of cryptocurrencies, valued (on a cost basis) at almost $1.2bn as at March 2018. As at March 2018 this consisted of over 1 million Bitcoin Cash. The market value of the altcoin portfolio has fallen in value since Bitmain invested, with almost all the losses attributable to Bitcoin Cash, as the chart below shows. 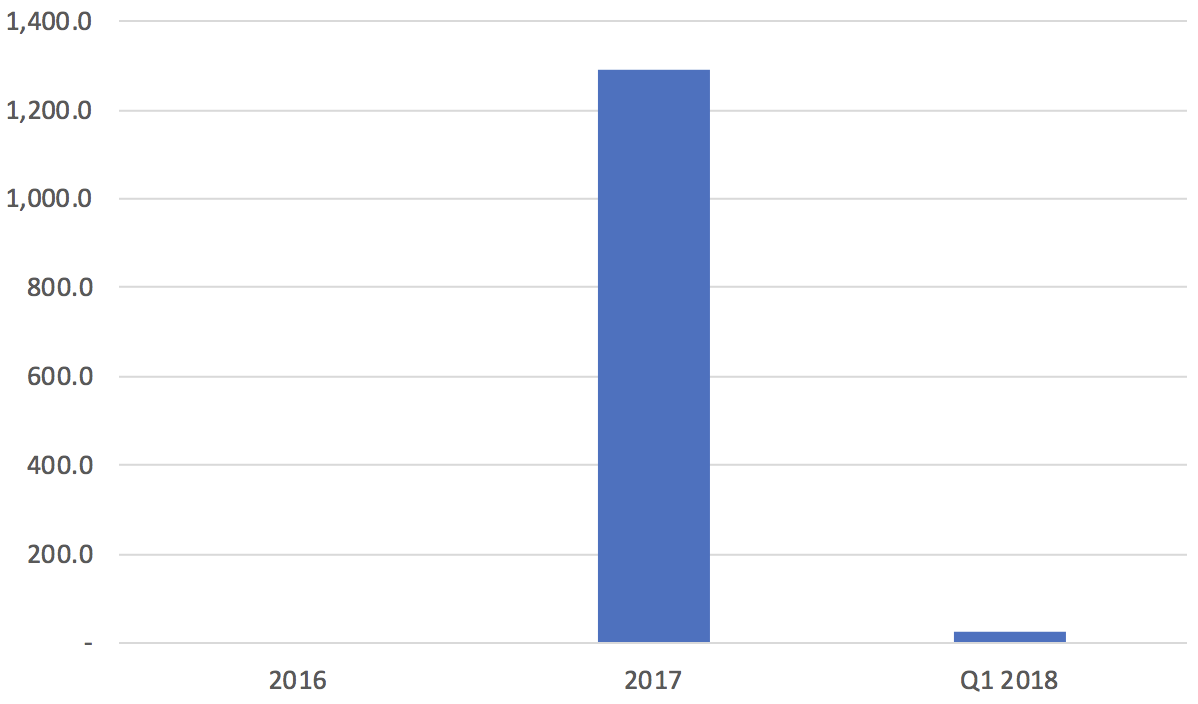 In a sense of course none of this matters. Bitmain spent their own funds on risky assets and they knew the risks. For a public company the situation could be a different, with investors expecting the company to invest in core operations or return money to investors. Although perhaps our expectations for governance here are too high for Hong Kong.

Why are Bitmain doing the IPO?

In our view the primary motivating factor for the IPO is simply that Bitmain’s competitors are also planning on doing them and the industry is fiercely competitive, as Bitmain’s loss making prices indicate. Rival Canaan Creative are planning on an IPO and Bitmain are unlikely to let them obtain such a funding advantage. Bitmain’s IPO should deduct money from the pool of capital that could otherwise be invested in Canaan as well as the other miners and it is therefore a good complement to the strategy of lowering prices.

The other reason for the IPO may be to strengthen the balance sheet after investing the majority of the operating cash flow into Bitcoin Cash. Bitmain only had around $105 million of cash on the balance sheet as at March 2018, when this figure could have been nearer a billion dollars if the company hadn’t acquired so much Bitcoin Cash. At the same time the business does require a lot of cash, for example the large advance cash payments TSMC require, which reached a peak of $866m in 2017.

The debate over Bitmain’s technological advantage

The narrative surrounding Bitmain’s technical capabilities can be spun in either direction and as ever the truth may lie somewhere in the middle. However, one thing is clear, if these mining companies do go public, the picture should be far less murky going forwards and we think that could be a significant positive for the cryptocurrency community.

In a way some of Bitmain’s biggest mistakes, such as producing too many units and buying too many speculative altcoins in a bull market, are somewhat analogous to the typical behaviour of mining company management teams.  For instance gold mining firms often invest in high cost assets in bull markets and then fail to invest in quality low cost assets in bear markets. Perhaps it is not totally fair to blame these companies, the hedge funds and institutional investors who own the shares are often just as, if not more, at fault. Greed, fear and the emotions of market moves can affect us all. Therefore although Bitmain has made mistakes, in many ways they are not unusual or unexpected.

We are sure you have heard it before, but “cryptocurrency is here to stay”. In that environment we think Bitmain has the ingredients to be one of the great companies in the space. Bitmain can be a legendary crypto company, generating strong shareholder returns for decades to come, but in order to achieve this (and it’s a lot harder than it sounds) the Bitmain management team may need to improve their management of company resources. Once the company goes public, capital allocation decisions in this volatile and unpredictable market will be difficult enough, letting emotions impact too many investment decisions may not be tolerated.