Abstract: In this piece, we revisit “The DAO” and the events following its failure. We analyse what happened to the various buckets of funds inside The DAO, on both sides of the chainsplit that it caused. We identify US$140 million of unclaimed funds still inside what is left of The DAO.

The DAO marketing material from May 2016 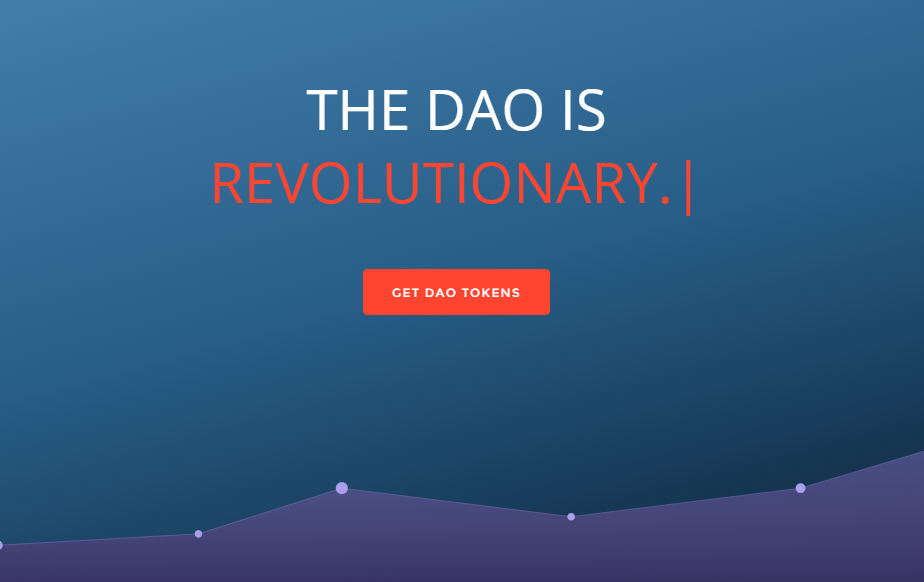 In the early summer of 2016, a project called “The DAO” generated a substantial amount of excitement in the crypto space. DAO stands for Decentralized Autonomous Organization, and to the confusion of many, The DAO (as the group styled its name) consumed that entire moniker for itself. The DAO was to be an autonomous investment fund, investing in projects determined by the token holders. The fund was to be governed by a “code is law” philosophy, as opposed to the centralised top-down control mechanisms in traditional investment funds, where key individuals matter.

Many believed this novel approach would lead to superior investment returns. Although it is a unique and potentially interesting approach, expecting strong investment returns at this point may be somewhat naive.

The fund raised Ethereum tokens worth approximately US$150 million at the time, around 14% of all the Ether in existence, with investors presumably expecting spectacular returns. The downside risk was expected to be minimal or even zero, since one was supposed to be able to withdraw one’s Ethereum from The DAO whenever one wished. In reality, doing so was a complex and error-prone process.

Problems with The DAO

As it turns out, The DAO was fundamentally flawed on several levels, as many in the Ethereum Foundation pointed out before the exploit was discovered.  For instance:

A few weeks after the conclusion of the token sale, a hacker found an exploit in the code that allowed them to access The DAO’s funds and drain some of it into a child DAO over which the hacker potentially had significant control. This led to an Ethereum hardfork, which was an attempt to prevent the hacker from controlling the funds and to return the funds to the initial investors. Since some in the Ethereum community were unhappy about this, it lead to the chainsplit between ETH and ETC.

The main groups and individuals related to The DAO 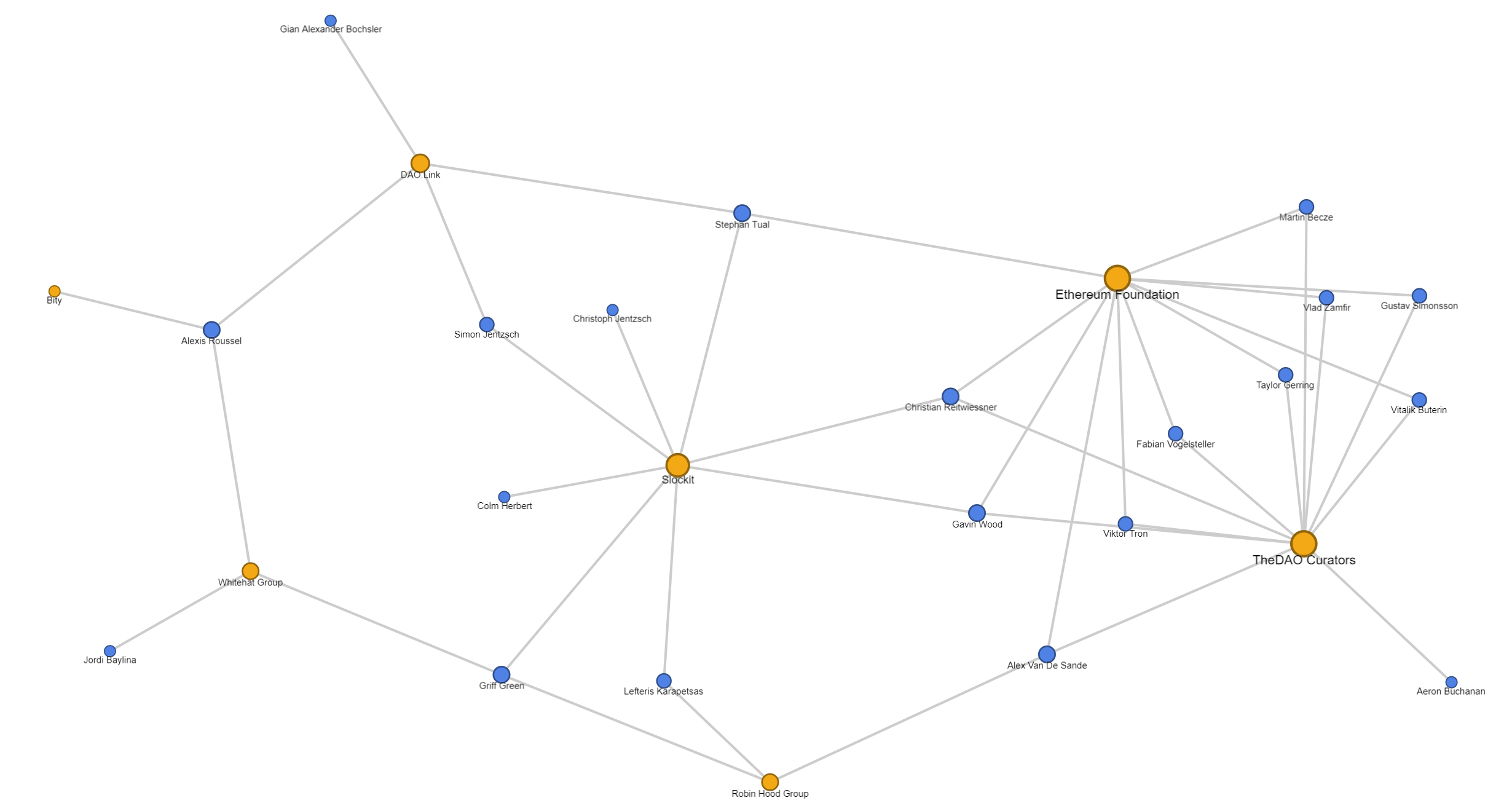 Network map of the main groups and the individuals involved in The DAO. There are other Ethereum foundation members with no association with The DAO, who are excluded from the diagram. Blue circles represent individuals;  yellow circles represent organisations. (Source: BitMEX Research)

In order to fully understand and account for the proper ownership of the funds, we must revisit the provenance of The DAO funds before, during, and after the hardfork.

A child DAO can be split from the main DAO as part of The DAO’s governance process, similar to a spin-off company.

The splitting process was exploited by the hacker using a recursive-call exploit, which drained more funds from the parent DAO than intended. The owner of a newly formed child DAO cannot withdraw those funds immediately but must wait for a voting period to end before securing those funds and being able to freely transfer them.

This voting period gave the Ethereum community a window of opportunity to attempt to reclaim the funds by attempting to exploit the hacker’s child DAO using the same vulnerability. This, however, might have resulted in perpetual splitting and a DAO war, whereby the funds would be stuck in limbo forever as long as neither the hacker nor RHG gave up. This process could be easily scripted so would not take much effort on either side.

One way to solve this would be the implementation of a softfork to censor the hacker’s transactions, preventing them from participating in this war and quickly allowing the funds to be recovered.

At this point, the RHG had managed to secure around 70% of the funds by exploiting other child DAOs, but in order to guarantee the ability to reclaim the remaining 30% (around 3.6 million pre-fork ETH), a hardfork was the only possibility. Moreover, the softfork proposal was found to have critical security vulnerabilities and was quickly scrapped.

After the fork, there are two chains in parallel universes: ETH, where the hack is undone, and ETC, where the hack remains. The RHG have still secured around 70% of the ETC, and could have continued the attack on the ETC chain using the aforementioned “DAO Wars” limbo strategy, but decide not to. To refund DTH on the ETH chain, a withdrawal contract is used, which DTH must call to claim their ETH.

Graphical illustration of the above transactions 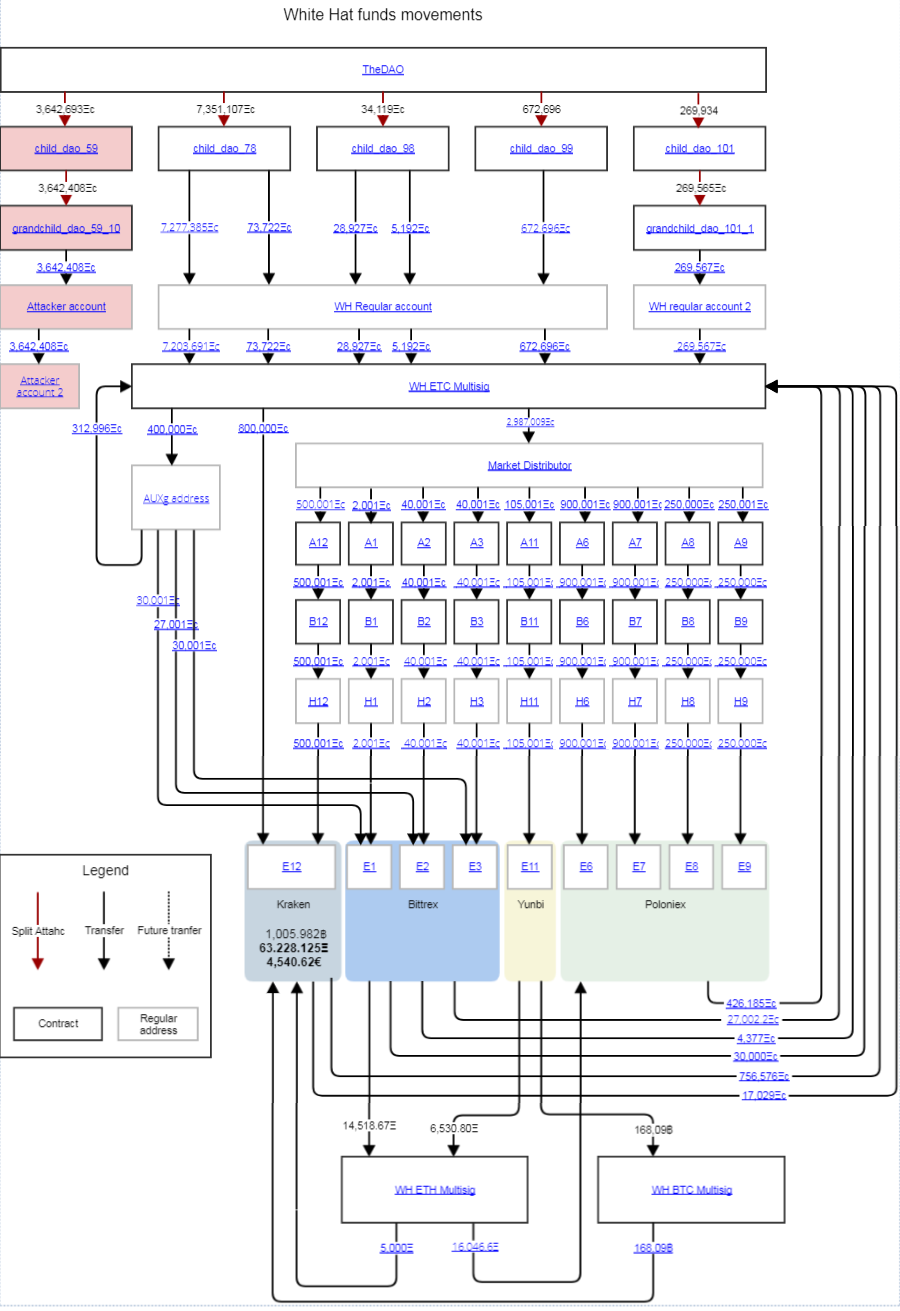 Graphical illustration of the above transactions 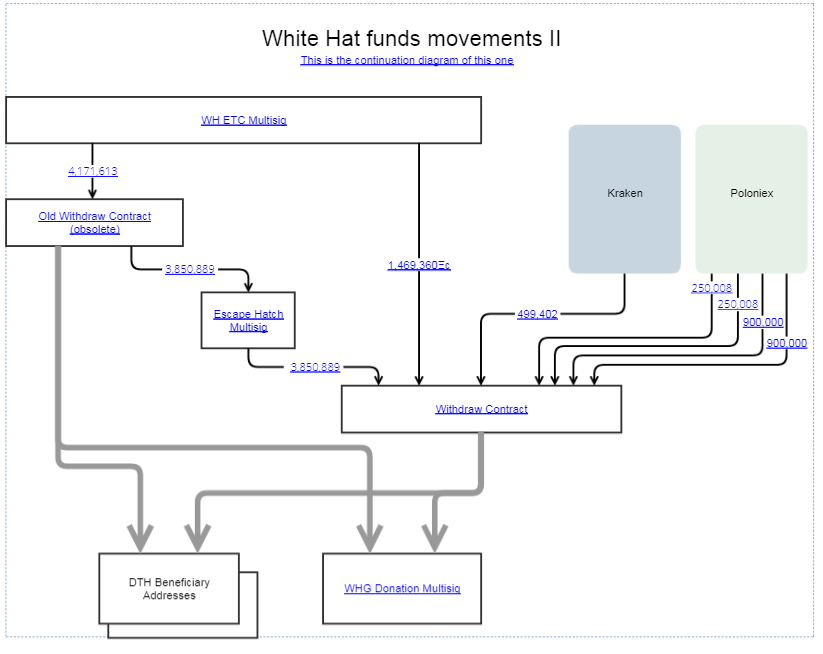 At the time of writing, the hacker has not touched the vast majority of the drained ETC, and is sitting on a stash of 3,360,332 ETC worth US$58 million.

One feature of the whitehat withdrawal contract is that a limit is set for the ETC funds to be withdrawn (originally set to three months, expiring on 30 January 2017). Due to the large proportion of the funds that were not claimed within the given three months, this period was extended twice.

As of 19 November 2017, approximately US$140 million in funds remains unclaimed, as the approximate breakdown below indicates.

DAO-related funds on the ETH side of the fork, calculated at a USD/ETH price of $368. (Source: BitMEX Research, Ethereum blockchain)

DAO-related funds on the ETC side of the fork calculated at a USD/ETC price of $18.30. (Source: BitMEX Research, Ethereum Classic blockchain) 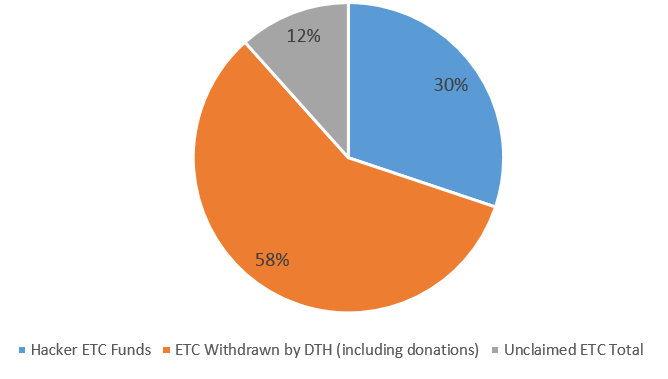 DAO-related funds on the ETC side of the fork. (Source: BitMEX Research, Ethereum Classic blockchain) 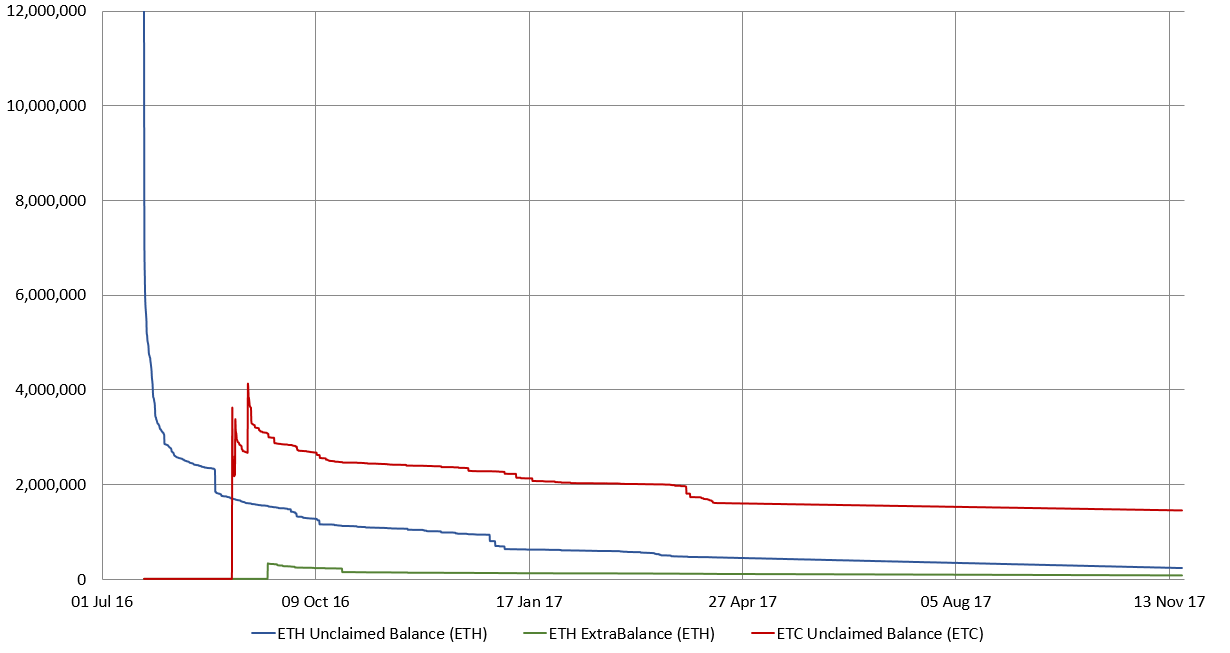 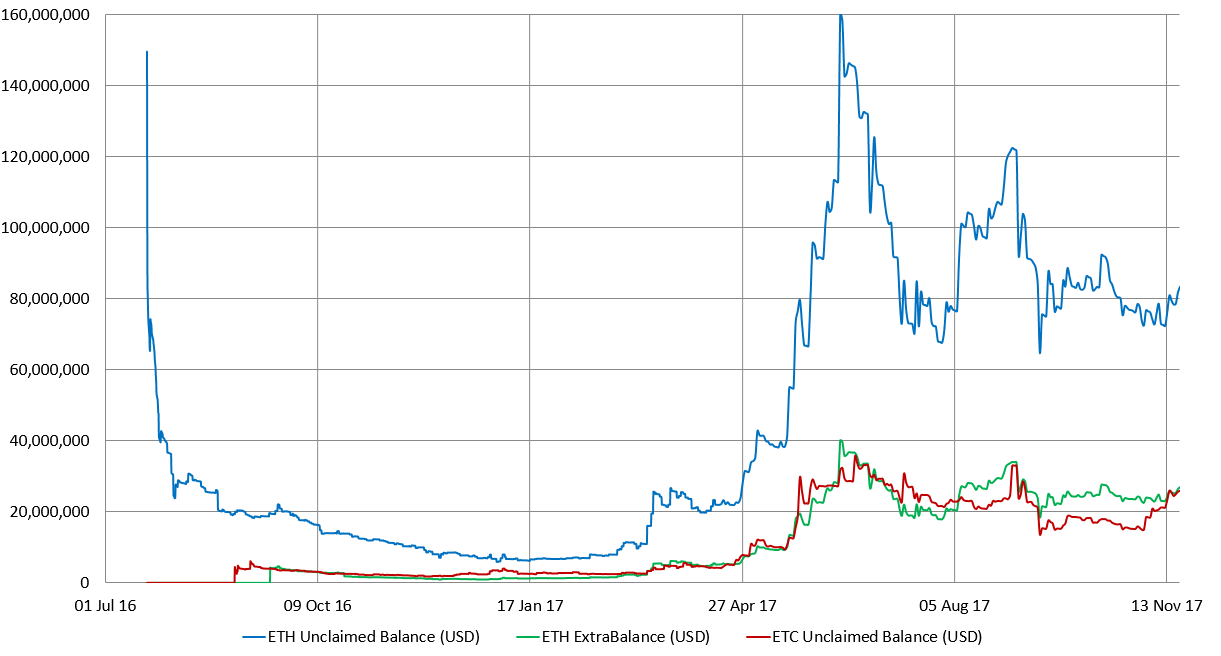 As the chart above illustrates, at the Ethereum price peak in July 2017, the USD value of unclaimed Ethereum inside DAO withdrawal contracts was even higher than the US$150 million initially raised.

Whilst the notion of a withdrawal contract sounds binding, all of the unclaimed funds are still in the control of the owners of those contracts.

All three withdrawal contracts have “safety hatch” mechanisms, meaning the owners of these contracts have the ability to withdraw all of the funds at any time.

Whilst The DAO curators have not indicated this is planned, it may be tempting to appropriate these funds if it is deemed that no more withdrawals will take place. The WHG, in contrast, have designed their contract specifically to ensure this happens.

The whitehat withdrawal contract also has a timeout system for when DTH are able to withdraw their funds. This deadline will expire on 10 January 2018 (although it has been extended twice before), so attempts to withdraw after this deadline may be denied.

What next for the US$26 million of unclaimed ETC?

The next obvious question is what happens to the unclaimed funds on 10 January 2018.

There are four clear options at present:

An official response from Bity suggests that they may lean towards option two:

We feel that these funds should be donated to the DAO token-holders community where they originated from. After six months, we want to be able to donate these unclaimed funds to a community-wide effort, like a foundation supporting smart-contracts security. We want these funds to be used to develop the future of structures of decentralized governance, DAOs, and smart contracts. We will see what options are available at the time.

Of course, questions of who represents the DTH community will arise, and the transparency of spending the funds may come into question. Due to the anonymity of whoever is behind WHG, it may be difficult for the community to properly audit the spending of these unclaimed funds.

Additionally, this arbitrary deadline that prevents individuals from claiming funds that are rightfully theirs may result in future legal action. Given that, there is a possibility that WHG is only left with option 3 or 4, and will potentially allow ETC withdrawals to continue in perpetuity.

However, January 2018 will be over 18 months after The DAO, a long time in the crypto space. In addition to this, the price of both ETH and ETC has risen considerably since The DAO. Therefore, some DTHs may forget about their tokens in all the excitement and wealth generation, which is prevalent in the Ethereum ecosystem.