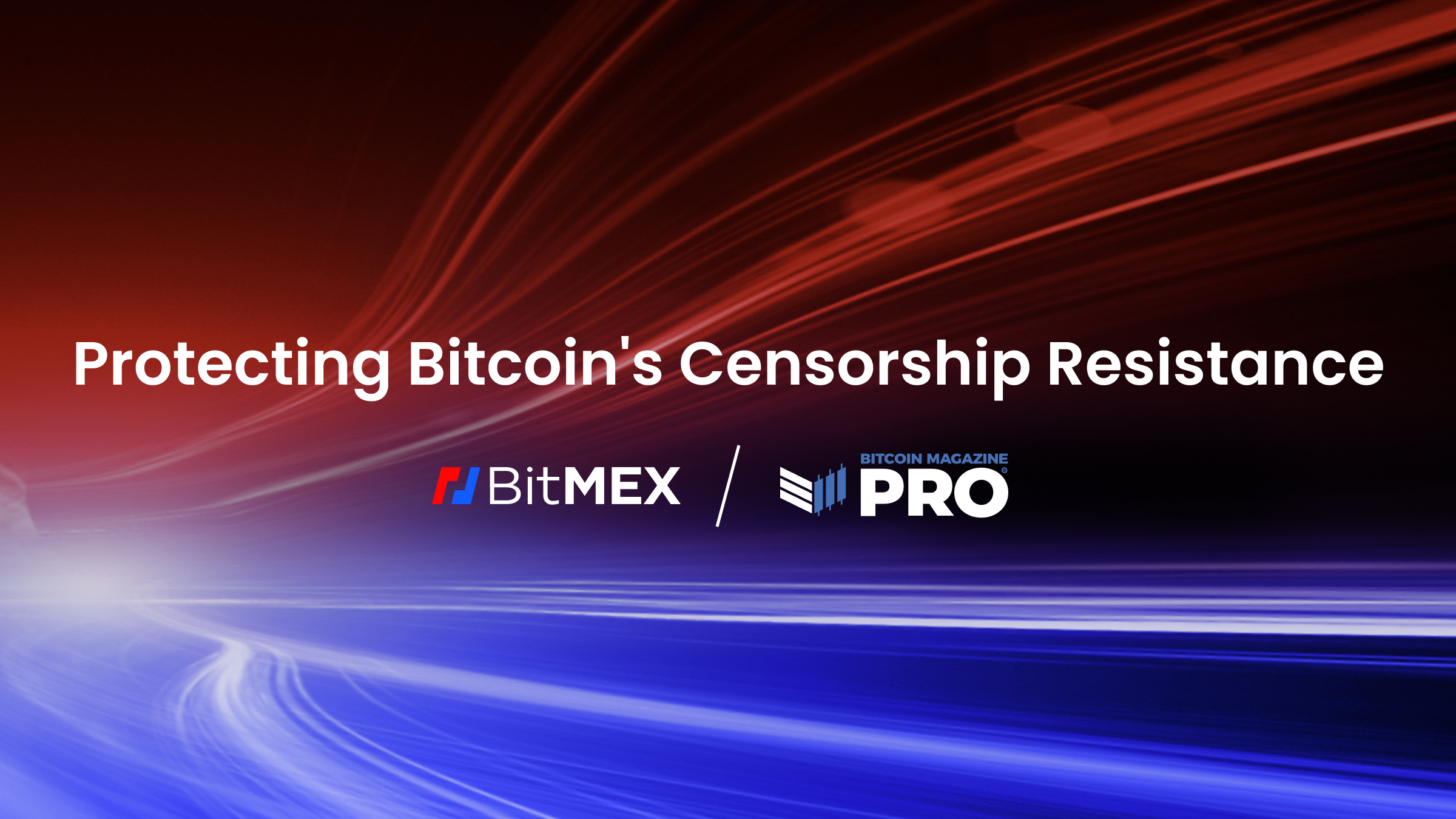 This article is part of our new series of crypto research content, produced by Bitcoin Magazine’s team and sponsored by BitMEX. To learn more about our wide-ranging partnership with Bitcoin Magazine, click here.

In Bitcoin Magazine’s previous piece, The Ethereum Merge: Risks, Flaws and The Pitfalls Of Centralization, they highlighted the centralization and lack of censorship resistance risks associated with Ethereum’s projected proof-of-stake transition. Transaction and address censorship is the real risk to any decentralized protocol and must be protected at all costs. Without it, the protocol will become increasingly centralized over time and fail. One of the latest and most important Bitcoin efforts to limit centralized attack vectors and to further increase decentralization is the rollout and implementation of Stratum V2.

As individual mining has become more difficult and competitive over time, Bitcoin mining has shifted to a model of pooled resources which dramatically reduces the volatility of payouts. Miners join pools, paying a service fee to the pool and in return, receive a consistent share of block reward payouts relative to their hash provided.

Stratum (known as Stratum V1) is the messaging protocol between miners and pools that’s been around since 2011. In Stratum V1, pools are responsible for ordering and selecting transactions. Full implementations of the Stratum V2 would give that power to miners instead.

As of today, nearly all of Bitcoin’s transaction ordering and selection rests in the hands of a few pool operating nodes. This dynamic gives a small number of pool operators the ability to double-spend or even censor transactions without owning any ASICs hardware. There’s much more to Stratum V2 than solving this problem but arguably it’s the most important feature of the protocol. Allowing individual miners to select transactions in a block would counter any nefarious censorship attempts from pool operators in the future.

Although Stratum V2 is a promising Bitcoin tool, its adoption will likely take years as initial implementations are not ready for deployment at scale yet. There is also an adoption obstacle with getting ASIC manufacturers to change their default OEM (original equipment manufacturer) firmware designs to incorporate Stratum V2. More detailed resources on Stratum V2 can be found from Braiins and Galaxy Digital.

Bitcoin has already faced an instance of a major public miner, Marathon Digital Holdings, mining a “clean” block that adhered to U.S. regulations across anti-money laundering (AML) and Office of Foreign Assets Control (OFAC’s) standards back in May 2021. After immediate community backlash, Marathon quickly reversed this strategy, with CEO Fred Thiel highlighting the following:

“There’s a certain amount of Bitcoin politics involved here. On the one hand you have groups in the bitcoin community who are all about maximum decentralization. They are against the whole concept of doing anything that has to do with financial regulatory compliance or government regulation. Then there are the institutional investors who like the fact that people are trying to make the blockchain more compliant because it makes it safer for you to invest.

“The industry will have to be responsive to regulatory requirements if the financial services industry and investors are going to participate — because they will not if it’s a violation of regulations,” said Thiel. “That being said, we fully support the bitcoin community and their desire for full transparency decentralization.”

After all, it’s a free market. Miners can adopt a strategy of censoring selected transactions or follow certain regulations if they choose that’s the best survival strategy. By doing so, many will face the backlash that made Marathon reverse course. Many will face government pressures that are too overwhelming. Evident from the Blocksize Wars, a global community of users advocating for decentralized money and an army of node runners are prepared to fight back (and powerful) when Bitcoin’s core ideals are threatened.

Even if we are to see select miners adhere to increased regulations in the future (we likely will), there will always be network hash rate in competition that’s incentivized to include select censored transactions to extract and maximize their revenue. Not all miners will fall under the same scrutiny or regulations that others will. To that end, that’s why the increased geographic distribution of hashrate across nation-states will be an important development over time. As of now, estimates show the United States has nearly 40% of all hash rate and is growing, which poses a growing centralized risk if U.S. policy turns against the Bitcoin community’s ethos.

Also increasing the share of home and small mining operations is an important strategy for increased decentralization, although data would suggest that the trend is larger mining operations consistently taking up a higher share of hash rate over time as miners are incentivized by economies of scale. As of June’s data this year we’ve seen a rising hash rate share of top public miners over the last year (note that this data series does have incomplete historical data which can overstate share growth, but the larger trend still holds true).

Bitcoin’s fight against centralized influence and censorship is just beginning. Bitcoin is still susceptible to similar risks that more centralizing proof-of-stake protocols will face (although less so in our view) and we suspect the Bitcoin network will prove more resilient over time than others. However, there’s no guarantee to this path. It will take consistent development, effort, adoption and valuable tools like Stratum V2 to make it a reality.

Ultimately, the censorship resistance of bitcoin stems from the economic incentives of proof-of-work mining. Miners, looking to maximize total revenue, include the highest paying transactions in their blocks. If one “regulatory compliant” pool/entity doesn’t include a certain high-paying non-compliant transaction, another miner/pool will happily capitalize.

miners aren’t building the blocks, the pools are. miners just point their hash at a pool

Over the long run, as the block subsidy of bitcoin continues to decline with each subsequent halving event, fees will trend towards 100% of miner revenue. This dynamic actually increases protection against censorship, as miners do not have a block subsidy to rely upon and only receive revenue from fees. A future where regulated mining entities can only mine whitelisted transactions is one where they quickly are outcompeted by their peers, which will translate into falling market share and profitability for any actor that attempts to do so. Attempting to sanction/censor certain transactions will just lead to those users paying higher fees to effectively bribe miners to include their transaction in a block.

this dynamic only increases the more halvings take place

good luck only mining whitelisted transactions, your future bankruptcy is imminent as your competitors grow stronger😆😆😆

To be the first to know about our contracts, new listings, product launches, and giveaways, you can connect with us on Discord, Telegram, and Twitter. We encourage you to also check our blog regularly and subscribe to the Bitcoin Magazine Pro newsletter.