Abstract: This piece contrasts mining economics between Bitcoin and traditional resource mining. We look at how the difficulty adjustment can impact profitability in the mining industry and some potentially perverse incentives. 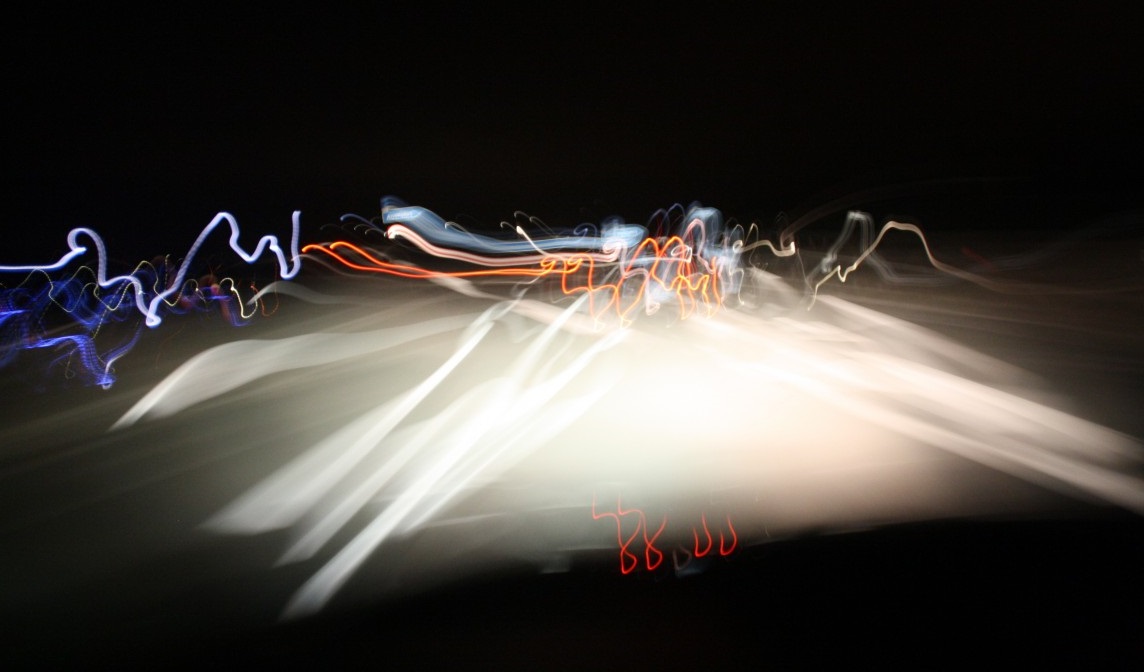 Mining is the random process by which new Bitcoin blocks are found, such that transactions are confirmed. This is a necessarily competitive and energy intensive process. In order to ensure a smooth and reliable network, every two weeks, based on how many blocks were mined in the period, the mining difficulty adjusts. There is an average target interval between blocks of 10 minutes.

A two week period is split into 2016 sections of 10 minutes.

The below chart shows the difficulty adjustments (red line) and the calculated rolling two week hashrate estimate (green line), over the last 2 months.

In theory, the difficulty adjustment keeps the system in check, in an equilibrium position, when external inputs change. For example consider the following scenario of a sudden increase in the Bitcoin price:

The same kind of logic can be applied to an increase in Bitcoin transaction fees or the release of new more efficient mining hardware. The theory can also be used in reverse, for a sudden Bitcoin price decrease.

Contrary to a popular misconception, this short two week period combined with the theoretical ability of anyone to quickly enter the mining industry, does not mean mining industry profit margins tend to zero every few weeks. What the difficulty adjustment may mean is that the profit margins of the most marginal miner quickly tend to zero. However, not all miners are the same, for example some miners may benefit from structurally lower costs, such as lower electricity costs, more scale or an effective maintenance regime. These more efficient miners may be able to produce stable profits throughout these cycles.

In addition to this, it is no longer true that there are limited barriers to enter the Bitcoin mining business, at a particular cost level. For example perhaps a large capital investment is required, there may be large time lags before the mining farm is active, cheap electricity may be difficult to source and the latest specialist mining chips may be hard to get hold of. Therefore the assumption that there are limited entry barriers may no longer hold anyway.

The Gold Mining Industry as an Analogy

The below chart illustrates total world gold mining production, by mining company. The x-axis displays the proportion of global gold production by company, while the y-axis is a measure of the cost to produce one troy ounce of gold. The cost measure is called “All In Sustaining Costs” (AISC), which includes both the marginal cost of production (variable costs) and annual depreciation of the capital investment incurred to construct the mine (fixed costs). The straight red line represents the spot gold price.

If the gold price increases, over the long term, more gold miners may join the industry on the right hand side of the chart, increasing the supply of gold, eventually causing downward pressure on the price of gold. This type of equilibrium cannot occur in Bitcoin since the supply is fixed, therefore the difficulty adjustment is an alternative equilibrium mechanism.

Starting up a new gold mine takes many years (currently much longer than in Bitcoin) and the miner may want a large price buffer before deciding to invest in a new mine, therefore Bitcoin’s equilibrium mechanism can be thought of as occurring much faster than in traditional mining.

The grey bar on the far right hand side of the chart shows a miner making a loss. However, since the AISC includes depreciation, it may be rational for this loss making miner to remain open, to make a contribution to the capital investment initially made, although the original investment decision turned out to be a bad one.

The same logic could be applied to Bitcoin mining, the fixed costs are items such as acquiring the mining equipment and building a mining farm, while the variable costs are items such as electricity bills and maintenance. Therefore, just like in traditional mining, it could be rational for a loss making Bitcoin miner to remain open, as long as it’s making a contribution to the initial fixed costs. One could call this a free cash flow (FCF) positive miner. This could help ensure the mining hashrate and Bitcoin network conditions are more stable than they otherwise would be.

When the mining difficulty increases, the cost for the miners to produce one Bitcoin should shift upwards. Incidentally this is a not necessarily a parallel upward shift in costs. An upward difficulty adjustment by 10%, should in theory only increase the variable costs needed to produce one Bitcoin by 10%, while leaving the fixed costs, such as depreciation, unchanged.

This dynamic is different from traditional resource mining (e.g. gold mining). If the gold spot price changes, this neither impacts the variable or fixed costs, of producing one troy ounce of gold. Therefore in gold mining, the actions of other miners cannot directly impact the costs in any one mine, whilst in Bitcoin difficulty adjustments, driven by the actions of other miners, can directly impact the cost per unit production. If the spot price of gold increases or decreases, all gold miners take a parallel hit with respect to sales and therefore profits per troy ounce. This dynamic is different in Bitcoin mining. As a result of this, in Bitcoin, the mining industry could be more stable than for gold mining. However the downside to this stability is that the Bitcoin spot price may be more volatile than gold, as production volume doesn’t adjust to reflect price changes.

In theory, Some Bitcoin Miners Could Even Profit in Absolute Terms from Falling Bitcoin Prices

If the spot price of Bitcoin falls, initially all miners take a parallel revenue hit per Bitcoin produced, just like in traditional mining. However, should miners on the right hand side of the cost curve leave, depending on the shape of the costs curve, some miners could actually see the absolute level of their profits increase. In some ways this could make the Bitcoin mining industry earnings more resilient to price crashes, but in other ways it could produce perverse incentives.

As the contrived and perhaps unrealistic cost curve below demonstrates, if the Bitcoin price were to fall to $800 form $1,000, the large chunk of miners with costs just below $1,000 could shut down their machines. The difficulty could then adjust downwards and miners on the left hand side of the curve could, in theory, increase the absolute level of their profits. A similar analysis could be conducted, but instead of miners leaving, it could apply to the absence of miners entering the market. 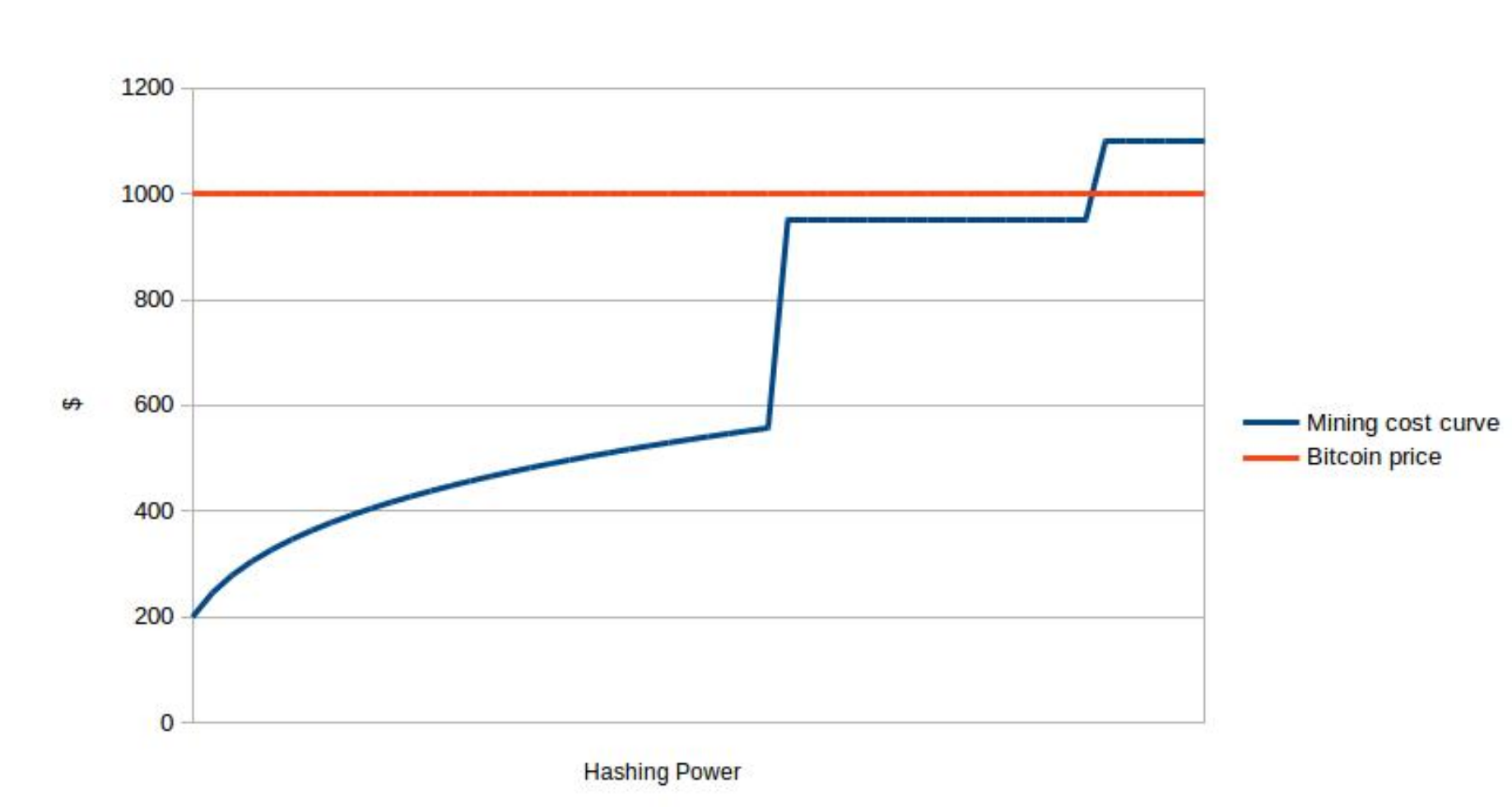 Therefore, perhaps some miners may benefit from falling Bitcoin prices, in some time periods. Who knows, we may already be seeing this phenomenon, to some extent, with larger lower cost miners wanting the price to remain low such that new miners do not enter the market. Although this is probably somewhat unlikely.