Abstract: Bitcoin Cash successfully split into two coins on 15th November 2018, Bitcoin Cash ABC and Bitcoin Cash SV. BitMEX Research sponsored a website, forkmonitor.info to track the two chains. There is now a “hashrate war” between the two coins and the hashrate is higher than one would expect given the price of the coins, such that miners are making large losses. The website has now been updated to help estimate the value spent mining on each side of the split and the loses miners may therefore be making. 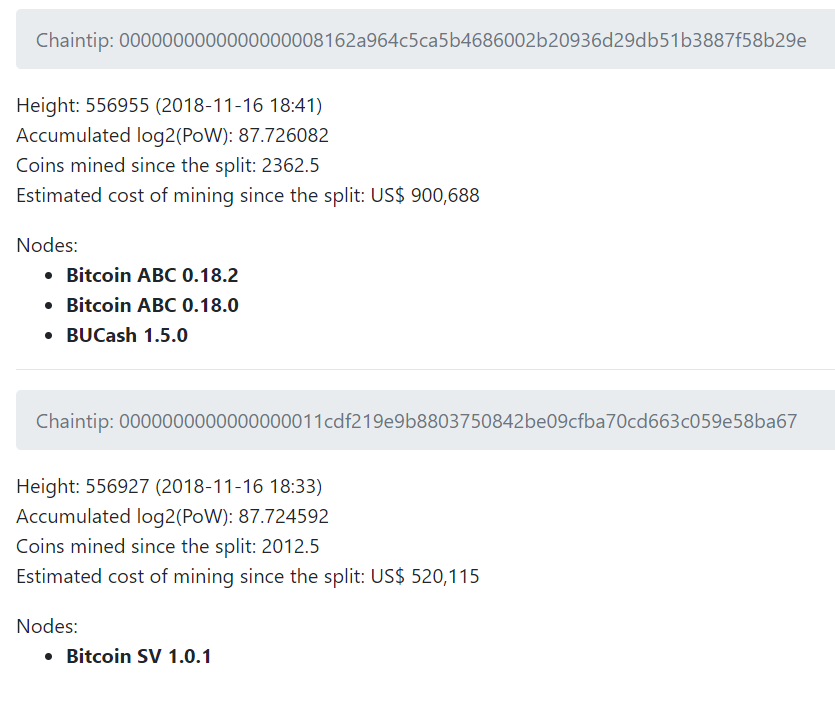 Based on the mining spend since the split figure provided, one can estimate the total expected losses, based on the price of the respective coins, as the table below shows:

Although the table above shows that both sides are making losses, it illustrates why the ABC side may be in a stronger financial position than SV. Not only is ABC in the PoW lead (both with respect to the number of blocks and accumulated work), but the SV miners have larger expected losses than ABC miners, due to the lower price of the SV coin. The SV losses are also larger relative to the potential revenue, with a profit margin of minus 166.4% compared to ABC on minus 45.5%.

Despite this situation, one should of course be aware that the prices of these coins are volatile and highly uncertain. There is no guarantee that either side will be able to sell the coins they mined. However, the ABC side does have a reasonably liquid futures market.

What will happen next?

Mining is currently continuing on both sides, with neither side willing to back down over the fight for the most work chain. Despite the bleak financial situation, the rhetoric on the SV side remains strong, with Coingeek stating that they may be prepared to keep this up for “months and months”.

This will bleed Bitmain’s cash and cryptocurrency reserves, because we are prepared to fight for months and months. If I were a shareholder or investor in Bitmain, I’d be asking why Jihan Wu is spending all your money to control BCH when Bitmain’s business supports multiple cryptocurrencies.”
(Source: Coingeek)

However, with just around 24 hours passing since the split and SV miners already US$324,904 in the red, using our conservative assumptions, we would be surprised if the situation continues like this for months.

While the rhetoric from either side is strong, in a way the hashrate battle is totally pointless. Users and investors are free to choose the ABC or SV side of the split no matter which chain has the most blocks or highest accumulated work. The narrative of being the higher work chain appears important to proponents of the two coins, but the prudent think to do would be to step back and mine the most profitable coin.

In our view, as the accumulated losses gradually start to increase, it is inevitable that the parties involved step back and allocate the hashrate such that its distributed in a proportional way to the prices of each coin. How long this will take, we do not know, but the forkmonitor.info website should provide a useful tool. It can help asses the extent to which financial pressure is building on each side in this somewhat pointless hashrate war.