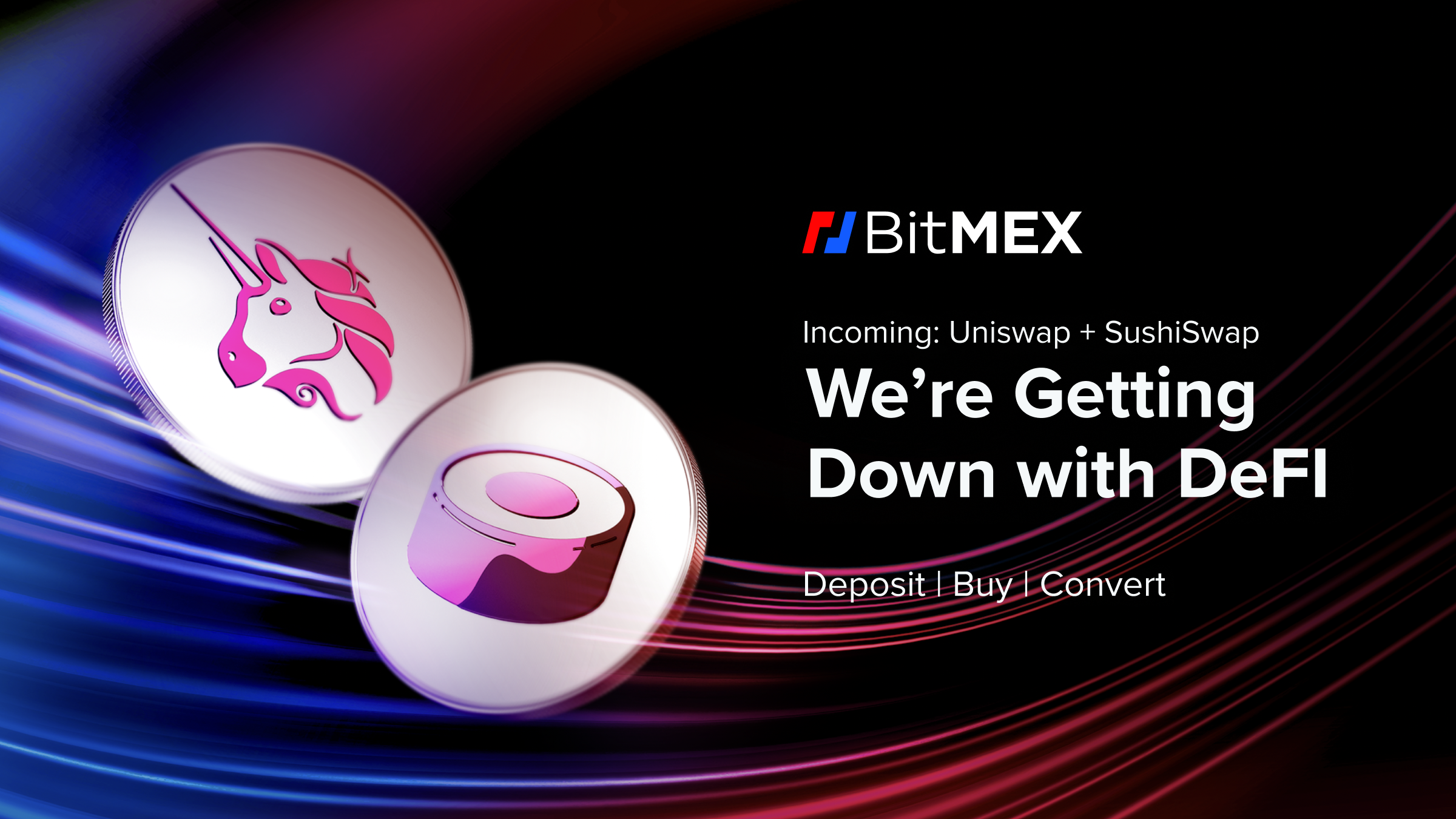 Fans of the SUSHI coin and UNI token, this one’s for you. Ahead of BitMEX Spot arriving next month, we’re welcoming both the Uniswap and SushiSwap DeFi tokens to BitMEX.

In  just a few days, UNI and SUSHI support will be available on BitMEX, meaning you will soon be able to do the below with these two popular DeFi tokens:

More good news: When BitMEX Spot launches in May, tokens like UNI, AXS, LINK, ApeCoin, MATIC, Bitcoin, Ether, and Tether will all be available to trade from day one. With more, including SUSHI, to come in the months after.

What’s the story behind the UNI token?

Uniswap (UNI) and SushiSwap (SUSHI) are two Ethereum-based tokens that share a common past. Both power decentralised exchanges (DEX) that operate in the Ethereum network, one forked from the other.

The UNI token is the governance token of Uniswap, the largest DEX operating in the Ethereum blockchain. It was one of the first DeFi applications to gain significant traction on Ethereum after its launch in November 2018. The UNI token enables community ownership over the protocol, allowing stakeholders to vote on key protocol changes and development initiatives.

Uniswap pioneered the Automated Market Maker (AMM) model, in which users supply Ethereum tokens to Uniswap liquidity pools and algorithms set market prices based on supply and demand. They can earn rewards while enabling peer-to-peer trading. There are currently hundreds of tokens available on Uniswap, and many popular trading pairs are stablecoins like USDC.

When Uniswap released the UNI token in September 2020, it used a unique form of distribution, whereby nearly USD 1,400 worth of UNI tokens were airdropped to each Ethereum address that had ever used the protocol. Uniswap has also announced that it plans to distribute a total of 1 billion UNI tokens over a four-year period.

What do I need to know about the SUSHI coin?

SushiSwap (SUSHI) is another decentralised exchange built on the Ethereum network. Originally forked from Uniswap with a few modifications, the SUSHI coin launched in late August 2020 by an anonymous developer, Chef Nomi. It was successful in grabbing the limelight from Uniswap, as it provided benefits that the former had already completed distributing.

The SushiSwap DeFi protocol offers temporarily lucrative prospects for liquidity providers who offer liquidity in the SUSHI liquidity pools. This is done by providers leveraging smart contracts, in order to provide liquidity pools that allow users to directly trade crypto assets, with no intermediary. By supplying an equal value pair of two SUSHI tokens, users can also become liquidity pool providers, and receive rewards whenever anyone utilises that pool.

Another main difference between both the UNI token and SUSHI coin are the fees. Uniswap v3 introduces multiple pools for each pair, each with a different swapping fee. Liquidity providers may initially create pools at three different fee tiers – 0.05%, 0.3%, and 1%. Riskier assets – or those that are traded rarely – tend to gravitate towards a higher fee. In contrast, SushiSwap charges a common fee of 0.3% for all swaps – 0.25% of which is given to liquidity providers. The remaining 0.05% is distributed to SUSHI holders.

We’ve been working to enhance the accessibility of our platform. Over the coming weeks, we will be supporting more cryptocurrencies in the build up to the launch of BitMEX Spot.

To be the first to know about the latest BitMEX product updates and launches, connect with us on Discord, Telegram, and Twitter.

If you have any questions in the meantime, please contact Support.