Abstract: In this piece, we explain the motivation behind the creation of the Lightning Network and why its scaling characteristics are superior to what we have today, potentially resulting in a transformational improvement. We describe some of the basic technical building blocks that make Lightning possible. We then examine some of its limitations, including the downsides of inferior security compared to transacting on-chain and why this makes Lightning potentially unsuitable for larger-value payments.

The motivation behind the Lightning Network

Blockchain-based payment systems typically work in a “broadcast to everyone” mode, in that when one makes a payment, one needs to broadcast the transaction to all participants in the network.

Nodes in such a system must:

Miners, meanwhile, are required to engage in an energy-intensive competitive process to determine if the transaction makes it into the ledger, just in case a conflicting transaction occurs.

There isn’t even special treatment for the recipient of the payment. For example, if one buys a coffee using Bitcoin, the transaction is broadcast to the entire Bitcoin network without prioritising propagation of the transaction data to the coffee shop or the coffee shop’s payment processor. Many consider this process to be inefficient. If the objective is to build a payment system used by millions of people across the globe, this method does not seem logical. 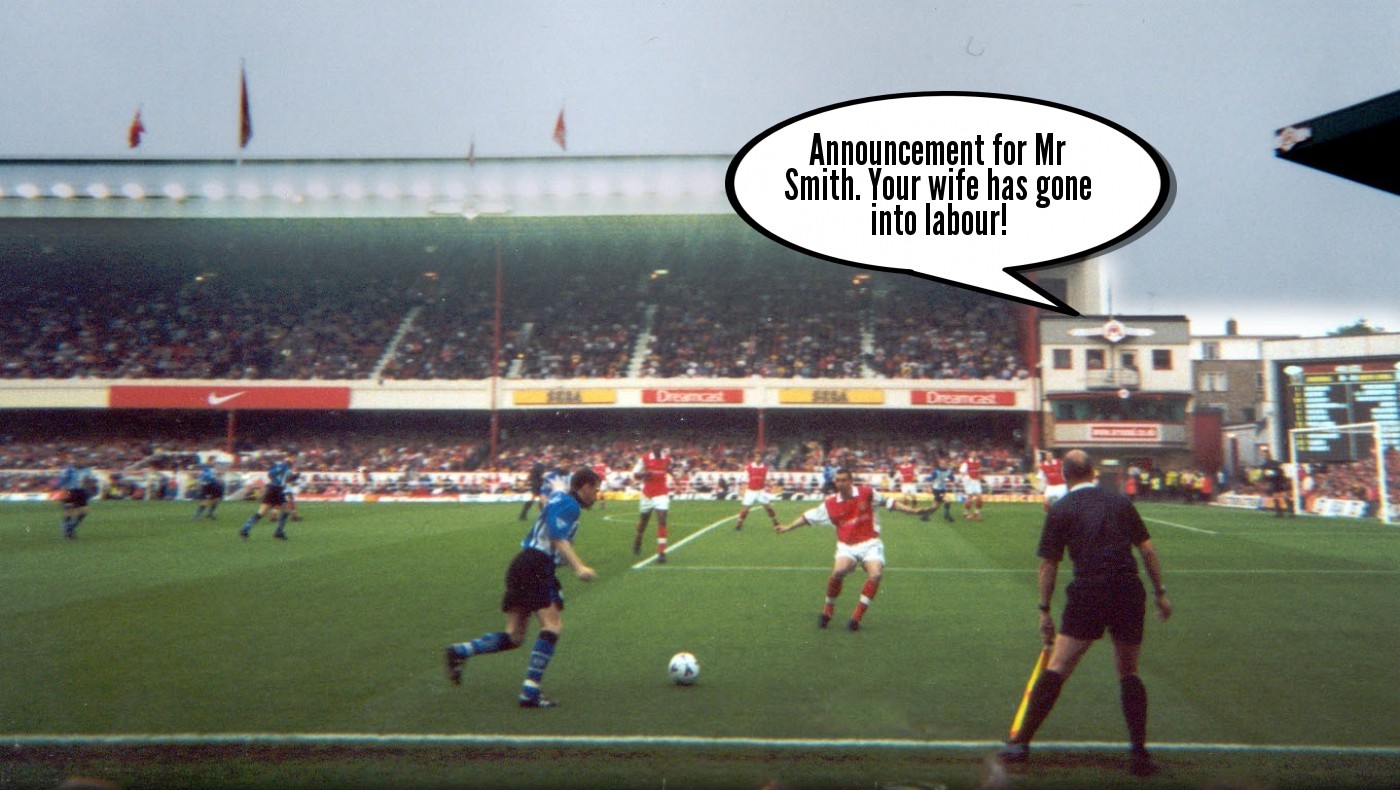 The old “broadcast to everyone” announcement method at sporting events, during Arsenal’s 3-3 draw at home to Sheffield Wednesday in May 2000. Prior to the widespread adoption of mobile phones, stadium announcers broadcast messages for individuals over the public-address system to all those in attendance. Mobile phones have made this process faster and more efficient, as messages can be sent directly to the intended recipient.

The Lightning Network represents an improvement in efficiency and uses a more logical payment-network structure. Instead of broadcasting a transaction to everyone, the transaction can be sent more directly to the payment recipient. Only when parties to the transaction are dishonest does one need to resort to the cumbersome process, which distributed censorship-resistant systems require to maintain consensus. In this way, one can achieve performance and efficiency almost equivalent to that of direct communication between the parties over the Internet, while retaining some of the security characteristics of Bitcoin’s blockchain.

However, building such a payment system, in which all parties can always revert to the blockchain and reclaim their funds if there is a problem, is complex and has some significant risks and limitations. 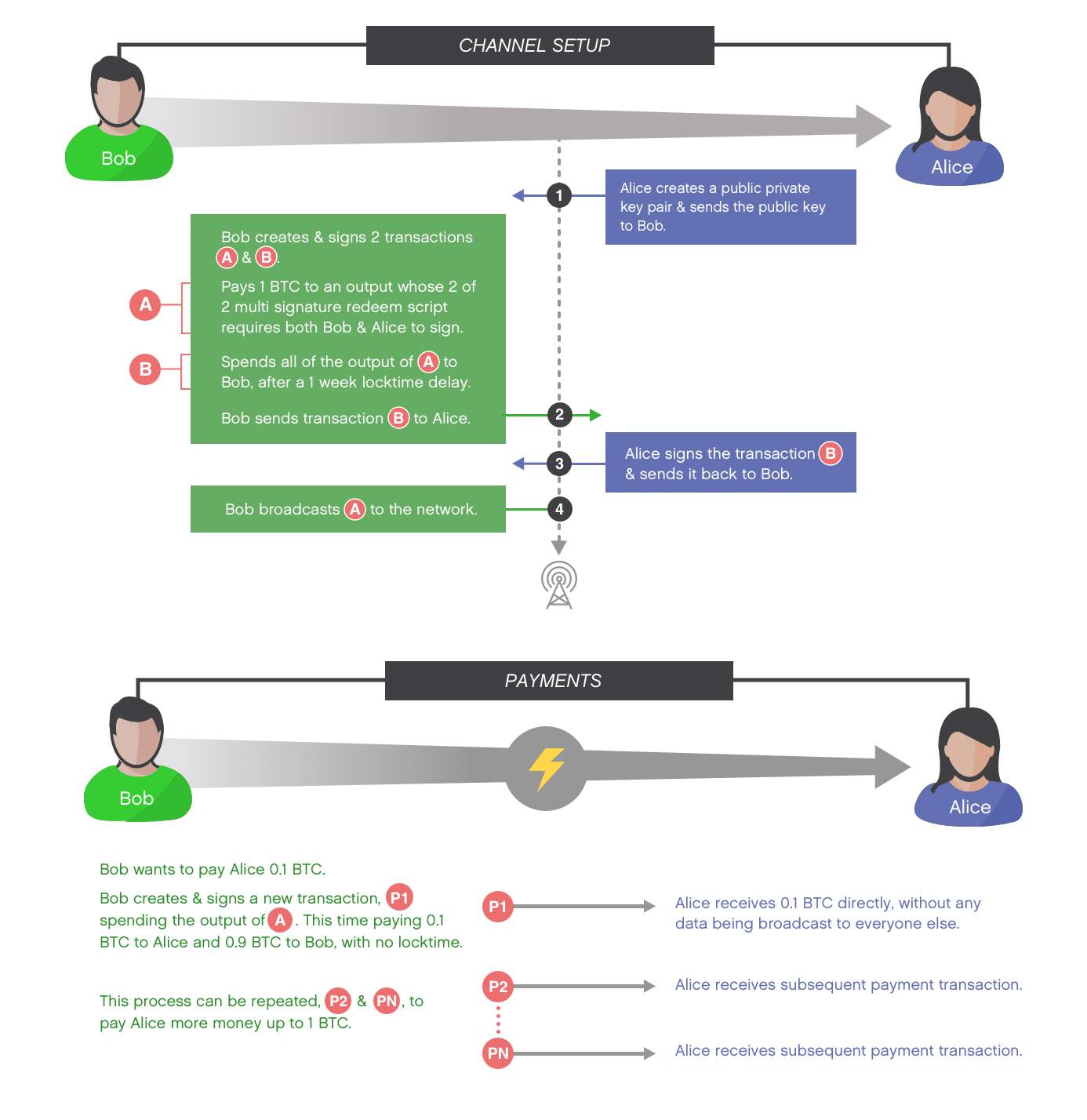 The diagram above depicts the traditional way to set up a basic unidirectional payment channel. Although setting up the channel involves broadcasting a transaction to everyone, once the channel is set up, multiple payments from Bob to Alice can occur by simply sending data from Bob to Alice, avoiding a broadcast to the entire network. The payment process can be repeated again and again until the funds in the channel, in this case 1 BTC, have been exhausted.

In theory, the above channel is secure for the following reasons:

This process is more secure if transaction A cannot be malleated by a third party (the TXID changing), otherwise Bob could have created transaction B only for it to become invalid as transaction A changes, thereby enabling Alice to hold the funds hostage indefinitely.

According to an e-mail that Satoshi sent to Bitcoin developer Mike Hearn, this basic structure was Satoshi’s idea:

One use of nLockTime is high frequency trades between a set of parties. They can keep updating a tx by unanimous agreement.  The party giving money would be the first to sign the next version.  If one party stops agreeing to changes, then the last state will be recorded at nLockTime.  If desired, a default transaction can be prepared after each version so n-1 parties can push an unresponsive party out.  Intermediate transactions do not need to be broadcast.  Only the final outcome gets recorded by the network.  Just before nLockTime, the parties and a few witness nodes broadcast the highest sequence tx they saw.

How the Lightning Network actually works

This micropayment construction can be considered the core building block for the Lightning Network, which is essentially a network of these payment-channel-like constructions. Payments find a path along channels which are already directly connected to each other until they reach the final recipient.

The old locktime feature can be replaced with more advanced functions:

The resulting Lightning Network and its advantages

The Lightning Network should then, in theory, allow all participants in the network to make near instant and cheap transactions in all directions by finding a path among the nodes. This therefore avoids broadcasts to the Bitcoin network, as long as there are no problems, and results in a scalable network. The architecture even allows microtransactions and improves the privacy of payments.

Channels can stay open indefinitely due to the relative-locktime feature and there should be no counterparty risk; if anyone tries to steal funds through a hostile channel closure, the other participants to the transaction will have a significant time window in which to issue their own redemption transaction and get their money back.

A big unknown is how people and businesses will actually use the network, and commentators have different visions. Some see the Lightning Network as eventually being ubiquitous for small payments, with complexities handled in an automated way. Others more sceptical of Lightning typically envision the various components of the network requiring more of a manual construction when the system is used and a poor user experience plagued by unexpected channel closures and periods of Lightning Network downtime.

In reality, the truth may lie somewhere between these two visions, with the network potentially moving to the more ambitious vision over time. What this disagreement appears to come down to is that Lightning sceptics see it as a complex, incomplete, and impractical payment system based on the channel-construction system alone. Proponents see Lightning more as a scalable building block for a second layer on top of Bitcoin’s blockchain, which will eventually be supplemented by wallets, payment protocol systems and channel-servicing companies, resulting in a simple and seamless user experience. Ultimately, wallets may be able to communicate with each other and then automatically, dynamically decide which payment methodology is best, on-chain or the most practical method via Lightning, without the user even knowing or caring.

The increased security risks of Lightning

While each of these three factors alone may not be significant, the need to potentially expose one’s private keys to the Internet when receiving payments, the risk of a hostile channel closure, and the risk of miners censoring channel-redemption transactions combined result in significantly inferior security — although all these risks can be managed to some extent.

There is a risk that lazy or poorly informed users keep too much money in a channel and funds are lost or stolen due to one of these failure scenarios. There is also the risk that price volatility results in users keeping more funds in payment channels than they would otherwise have intended.

The Lightning Network does appear to potentially offer significant and transformational improvements with respect to scalability. As a result, transaction speeds and transaction fee rates should dramatically improve, without impacting the underlying security of the core protocol. Crucially, however, the inferior security properties of Lightning payments may make the Lightning Network unsuitable for larger payments (or, at least, it may be irresponsible to use it for larger payments). Speculation and investment flows, which require these larger payments, currently appear to be the major driving force in the cryptocurrency space, with the volume of retail payments being relatively small in comparison. Because of that, Lightning may not be as big a game changer as some imagine, at least in the medium term. While enthusiasts appear likely to adopt this technology quickly, widespread adoption may take considerable time.